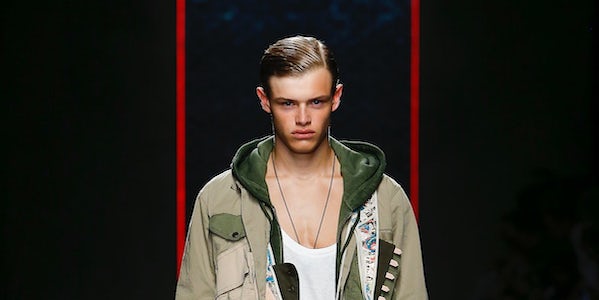 MILAN, Italy — Is it still possible to draw inspiration from the military, which has been tapped in every possible way over the years? Apparently, it is, especially as fashion’s current preoccupation with function and performance is so in sync with military gear. Such was the case at the DSquared2 co-ed show tonight, where Dean and Dan Caten delved into a militaristic fantasy of reconfigured fatigues, humongous parkas and blousons, gigantic sneakers and massive multicolor wedges, all dressed up with lacing galore. It made for some outstanding product, with outerwear being particularly noteworthy, and evening gowns that looked delicate and aggressive at the same time.

It seemed like a more realistic vision of fashion — at least in menswear — firmly removed from the beefcake, buff fantasies of the past. that said, the Catens did not deliver a groundbreaking fashion message. Lately they act more like followers of the main trend s — in their own distinctive way, sure — rather than leaders. In other words, DSquared2 got too formulaic. Appealing, but formulaic. It’s time to move further on.