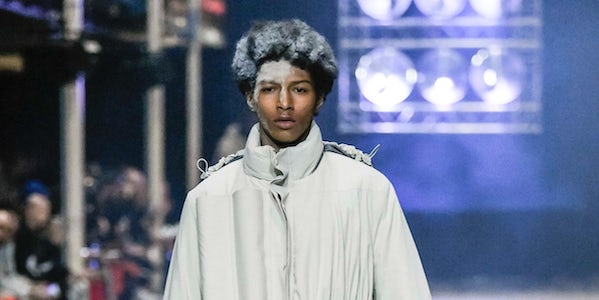 LONDON, United Kingdom — As usual, Samuel Ross opened his post-show comments with an update on what he called the “hypergrowth” of A-Cold-Wall*, just hours before he was announced as winner of the BFC/GQ Menswear Fund 2019. He’s minting it with his increasingly sophisticated marriage of streetwear roots and high-concept design philosophy. His latest collection was his most accomplished to date. Ross placed a new emphasis on accessibility (he opened his show to the public, or at least design and architecture students from several London colleges) and positivity. He talked about celebrating the human form, appreciating the body, rather than encasing it in something protective, using rubber trims, for instance, where once there would have been metal. There was “a new softness and elasticity”. Sensuality, too, in the relaxed flow of the clothes. Ross himself embodied this new spirit, taking his bow barefoot in head-to-toe white.

But the story he told still had plenty of the darkness and drama that he favours. The location was a huge abandoned printworks on London’s outer reaches. The soundtrack was grandiose electronica. The colour palette of sand and spice and sea suggested nomads, hooded, harnessed, belted and laced like 22nd century samurai. An ominous new bag shape looked ideal for their futuristic weaponry. In fact, there might have been an intriguing dialogue going on between futurism and medievalism. Pieces of lead, most medieval of metals, wrapped a few faces. Ross mentioned that his father is the only black stained glass artist in the UK. He said he’d always loved lead for its malleability, but the osmosis here between flesh and metal had an ambiguous subtext. Lead is, after all, fiercely toxic.

Ross also applied clay to his models’ faces. Others had glass growing round their jawlines. At one point, the room filled with a damp mist as a couple of waterproofs walked past (climate change in the house). Lead, clay, glass, water: the designer claimed he wanted to make a point about “our historical and emotional relationship with objects”. And thus does the primal past inform an uncertain future. As much as Ross insisted on optimism, his models did appear a little bruised, wounded even. And a couple of the most striking pieces in the show looked to be covered with something microbial. The mould of history?