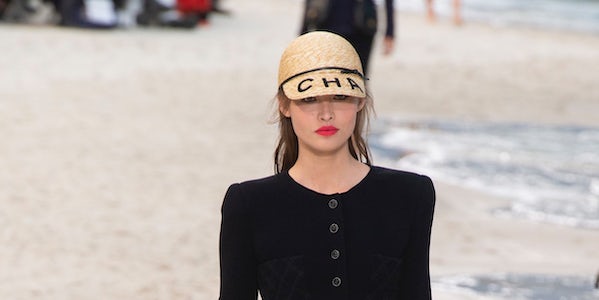 PARIS, France — “I was a beach boy once upon a time,” said Karl Lagerfeld after a Chanel show which recreated a shoreline scenario in the Grand Palais with 250 tonnes of white sand and a small lake of gently lapping water. “I had a house in St Tropez,” he continued. “Did you like swimming?” I asked. “Yes,” he answered, fixing me with a gimlet eye. “I had different lives.” There’s a famous Helmut Newton portrait of him in a swimsuit to vouch for that.

Lagerfeld said the beach was intended to evoke the famous stretches of sand on the island of Sylt, off the north coast of Germany. Or maybe it was St Barts without palm trees. “It’s the idea of a beach,” he added, and, because the idea occurred to him six months ago, it seemed safe to assume it had impacted on the collection.

Not really, said Karl. This wasn’t “Chanel Sur La Plage.” Still, the show opened in an atmosphere of sunny airiness that surely wasn’t entirely coincidental. When the models kicked off their Perspex-heeled mules and splashed down the shoreline, it didn’t appear at all incongruous that they were wearing Chanel tweed, even it was gold-speckled and trimmed in gold braid, or speckled with candy-coloured dots.

The jackets had a relaxed flair, A-lined, sometimes with kimono sleeves. The key visual motif – an abstracted parasol – played across frothy sundresses and sporty shorts. Night fell on the beach for a finale of navy and black, but the formality was defused by the shoelessness. Lagerfeld said he was surprised by how great the girls looked barefoot, “especially for a house like Chanel which sells hundreds of thousands of pairs of shoes.”

There were, as ever, dozens and dozens of looks. When you’re going to the trouble of installing a beach (or an airport or forest or waterfall or any of the other majestic mise-en-scènes Chanel has entertained us with), you’re not going to throw it away on a standard thirty or forty outfits.

What was more remarkable was how few longueurs there were, though perhaps you wouldn’t wear quite so much jewelery on the sand. The surfeit of Chanel-branded bracelets, belts and assorted baubles was a throwback to the irony-laden dazzle of the haute supermodel era, when Karl dressed Linda, Naomi, Cindy, Christy and Claudia as surfer girls. Maybe he was especially engaged with his theme on Tuesday because of his own happy memories of sun, sand and swimming.

Lagerfeld even allowed himself a pat on the back. “I must not be that bad. Perhaps I can continue. Ten years from now, it might be ok.” So that’s a date then, for 2028.