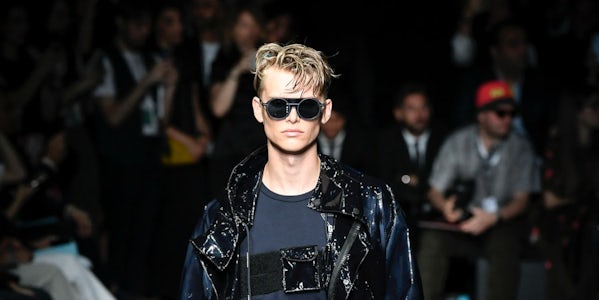 MILAN, Italy — Let’s start from the end, which as an Italian felt quite emotional. A parade of Olympic and Paralympic Italian athletes, decked in the EA7 blue tracksuits that will provide the official uniform for the Italian team at the Tokyo Olympic games in 2020, closed the Emporio Armani show. Once again, Mr. Armani will be the official outfitter of the national team. The athletes assembled on the square catwalk, upon which a digital version of the national flag was projected. It all felt very spontaneous rather than pompous, and authentic rather than blindly political. A celebration of warm-hearted Italian pride.

The same energetic lightness reverberated on the collection, which was dynamic, weightless and alluring. Contrary to the Emporio womenswear, which sometimes feels quite contrived and out of sync with the times, the menswear has a certain elan, a kind of effortlessness that feels relevant, especially where the formality of tailoring meets the speed and informality of sportswear. You know, that trademark Armani softness, toughened for the pace of the concrete jungle.

The mix does not always glue, but this season it did in a series of roomy trousers paired with shrunken jackets in artfully crinkled, slightly metallic fabrications and a color palette that went up from black and grey to notes of tobacco and burnt orange. There were many variations on the theme, but the endeavor was well edited and not a tad monotonous. The only minus was the abundance of massive sneakers, which practically grounded all the looks. It would have been nice to count on the ever aware, ever consistent King George to finally stop the ugly sneakers trend for good. It is time.