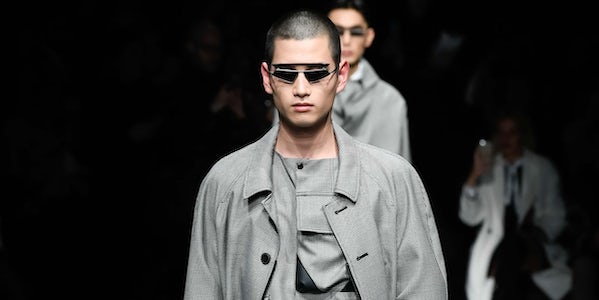 MILAN, Italy — How to escape the sportswear-streetwear trap, which has dominated the men’s fashion scene for so long but is increasingly showing signs of fatigue? In Italy, the winds of change are taking, understandably, a neo-sartorial route. But how to make tailoring modern?

Throughout his career, Giorgio Armani has turned to deconstruction to make his work fresh. This season, at Emporio Armani, he worked on a hyper-constructed silhouette, but the result was just as modern, not least because the formality was toned down by sporting details, big snowboarding volumes and touches of sleek digital elegance à la The Matrix. Nonetheless, the pièce de resistance was a square-shouldered, peak lapeled, straight of grain sartorial jacket, in a magnified Prince of Wales check. Such classic patterns were actually blown up all across the collection and occasionally shot with threads of lurex.

“The idea of dressing a young man in the kind of fabric he might have seen last on his grandfather looks very modern to me,” said Mr Armani backstage. It surely made for a high-impact graphic effect. It all looked very sleek and very cyber, keeping up with the Classic Pro — as in “progressive“ explained Armani — slogan which worked both as conceptual inspiration and embroidery on some pieces.

In contrast, the accompanying R-EA capsule collection made of recycled and sustainable fabric that hit the catwalk at the end of the show looked ultra-organic, very vintage Armani and very appealing. The contrast between the two approaches was challenging. reflecting the magmatic state of affairs in menswear these days.