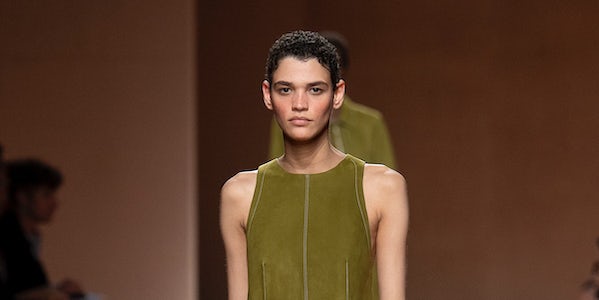 PARIS, France — The Tennis Club de Paris, a brutalist gem of a place, is not a neutral venue for fashion shows. After all, in the ’90s, it hosted quite a few seminal Helmut Lang shows. More recently, it was home to Phoebe Philo‘s era-defining Céline. In other words, it is a sort of temple to modernism.

“I was just looking for a spacious venue,” said Nadège Vanhee-Cybulski backstage after her best Hermès show since the start of her tenure. And whether the choice of show space was intentional or not, pared-down yet sensual modernism reverberated everywhere, making for an impactful collection that made more with less.

“This is one of the goals that I set to myself when I arrived in the house: upping the ante on craft and simplifying the rest, but it took time to perfect it,” added the designer. And simplified it was: a utilitarian line-up of outerwear, dresses, aprons and trousers done mostly in exquisite leathers in earthy, neutral hues with metal detailing. There was a sense of ease and functionality for sure, but glimpses of skin flashing beneath such workwear-inspired pieces added a seductive frisson. The tension felt fresh, propelling Hermès in a charming new direction.