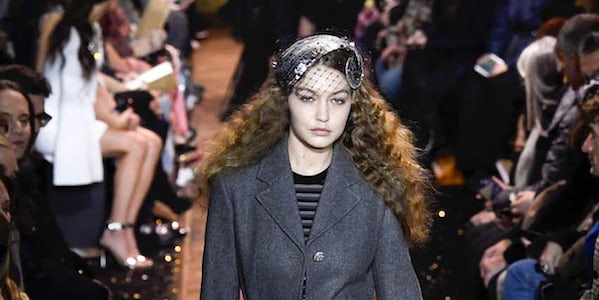 NEW YORK, United States — The myth of Studio 54 as an Oz of disco decadence has a ferocious grip on the popular imagination, but Oz was real for Michael Kors. He first visited the club on his prom night. “Anything was possible, a 17-year-old student could end up sitting next to Bianca Jagger.” Kors recently moved apartments and he came across his high school yearbook. That triggered a flood of memories. They geysered through the new collection.

“Everything in my life happened in the West 50’s,” Kors recalled. Lothar’s, the first boutique Kors designed for on W.57th St, Bergdorf’s, the corner where Bill Cunningham liked to shoot, uptown girls and up-all-night girls, Baryshnikov and ballet dancers on a break from Carnegie Hall, “streets full of people dressing with abandon.” Lots of characters — and no cellphones. “No one took photos,” Kors lamented, but his vivid memories of the melting pot made for a vivid, energetic show, the kind of glamorous tableau that Kors can create in his sleep at this point in his career.

But maybe it was a bit more pointed than usual. “Dressing with abandon is the best way to fight back,” Kors declared. In his manifesto, glamour is the best defence. Here, he even mixed it up with a little military, and a whole lot of the patrician man-styled tailoring he loves for his women. Those resting dancers were the inspiration for slouchy, off-shoulder cashmere knits (Broadway baby Kors invoked ultra-chorine Gwen Verdon) which were the collection’s subtle spine.

Then there were the frizzy-haired, feather-boa-ed, sequined, slip-dressed disco queens (shades of the models in “Eyes of Laura Mars”, which captured the same old scene in 1978). Kors struck a deal to use the 54 logo, appropriately glittered on a cashmere sweatshirt, sequined on a shift dress, printed on a huge puffa coat. VIP drinks tickets were turned into pendants. The designer’s eye for period excess was finely tuned in luscious fake furs and patchworked leathers.

More, More, More…Andrea True sang it on the soundtrack. Kors made a dream 70s pairing in model duo Kiki Willems — resplendent in patchworked Mongolian lamb, ruffled slipdress, fishnets and python platforms — and Jonas Glöer, in a savage shearling coat, distressed knit and Baryshnikov cap. Those two underscored the designer’s point about being young and sexy and dressing with abandon in New York City…then Kors rammed it home with Barry Manilow looking like a big sparkly fairy godfather and singing…what else?… “Copacabana,” the theme of young love’s disco dream.