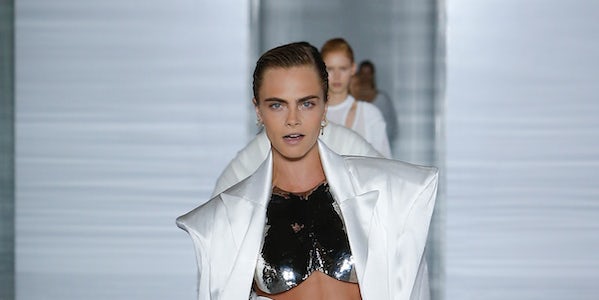 PARIS, France — Last season, Olivier Rousteing looked to the future for his slick, sci-fi Balmain collection; today he looked to the past — more specifically ancient Egypt, albeit seen through a distinctly Gallic lens.

Citing the “impressive obelisks, pyramids and columns that date from Napoleon’s campaigns and adorn this city’s most iconic public spaces,” Rousteing’s version of the future and past look eerily similar. That’s no diss, the designer is savvy to sublimate any seasonal fancies to the greater Balmain aesthetic he’s nurtured: one of ripped jeans, sharp-shouldered jackets, and rhinestone-encrusted bandage dresses. It’s what his customer — who he’s christened his “Balmain army” on social media — desires, and it’s the reason for the jarring sight of so many of them wearing ensembles better suited for the darkened dance floor of a discotheque at noon on a Friday.

Set to an ebullient 1980s soundtrack of Prince, Queen and Whitney Houston under the celestial paintings and rococo flourishes of a gilded salon at L’Hotel de Ville, the shows reflected Rousteing’s inspiration lightly, instead keeping to his well-established playbook (Oh, and as part of his ongoing quest to “democratise and modernise” fashion, he teamed up with the virtual reality headset company Oculus on an immersive, 360-degree view of his catwalk).

This season, his signature strong shoulders ballooned in proportion, as in the padded, linebacker-wide pagodas which topped a silky white floor-length jacket worn by Cara Delevigne and the fan-like slopes of a wrapped plissé top. Egypt peeked through, however, in dresses that were swaddled and draped in gauzy, unfinished layers, and gave off just a hint of mummified allure, while moulded metallic bodices were, perhaps, a nod to ancient statuary. The hieroglyphic print knits and T-shirts with sphinx and pyramid images were a bit obvious, as were the marbleised motifs meant to invoke crackling, aged plaster.

Where Rousteing was more successful was his playful approach to French classics: Chanel-like tweeds were slashed and worn drooping off the shoulders, Saint Laurent le smokings transformed into minis or liquid-y trousers topped with a cummerbund, and marinere sweaters became taut, glittering jackets.

At 33 years old, Rouesting is still so young, and it’s fun to see him upend time-honoured ideas of Parisian sophistication, injecting them with a bubbly energy that’s almost naughty in its irreverence. His energy and sense of humour could be felt in this impetuous dismantling of bourgeois classics, remaking them into something sexy, silly and supercharged with glamour.

Walk like an Egyptian? Hardly. During the finale, his models strutted.