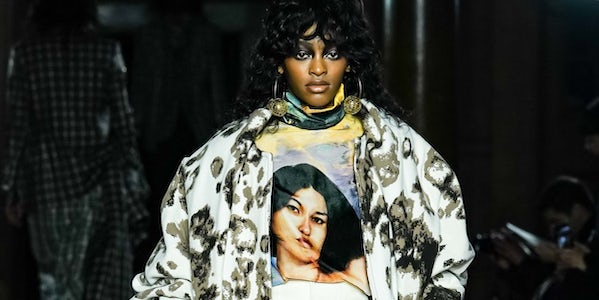 LONDON, United Kingdom — Edward Crutchley’s collections are, at their best, a flashy chat between luxury and the lure of the low life. His latest offering was, therefore, the designer at his best: a sense of ceremonial extravagance subverted by lush erotica and topped with a curly permed mullet that evoked ’80s hair bands. Bon Jovi, Crutchley suggested. (Julian Ganio, his stylist, favoured Mr Superfreak Rick James.) He wanted something a little scuzzy to counterbalance the opulent details of the clothing: the Javanese cloud print, the traditional gold-threaded weave called songket (also Javanese), the super-scaled coats, maybe even the starburst of temple incense sticks sported by the last model. All of that tells you anything you need to know about the Crutchley design ethos. He has an almost spiritual reverence for hyper-elevated craft, but he is also partial to a shot of gleeful kitsch. Elvis Presley’s tailor Mr Nudie is one of the designer’s icons. Here, Nudie-styled embroidery livened up a fitted plaid dress.

The bourgeois blandness of Crutchley’s spring collection perplexed fans. It left even him wondering if he’d underplayed his hand. “What do I do that no one else does?” he asked himself. The answer was close at hand, in the designs that won him the Woolmark Awards for menswear and innovation in February last year. Those clothes were richly glossed with artisanal inspirations from other cultures. That was the well he wisely returned to for Autumn/Winter. Crutchley’s genius lies in his manipulation of fabrics, the more patterns and deluxe textures the better. The Javanese influence was a standout. Another was his new idea for an animal print. Not the old familiars, but a pattern inspired by the wild dogs he’d seen on a trip to Namibia. Something a bit scruffier than we’re used to, reflecting Crutchley’s own appetite for a looser, less formal take on luxury. Perverse, in a way. As perverse, in fact, as the richly coloured silk shirts printed with Californian artist Erik Jones’s morphing nude forms, or the flat arcs of the Filipiniana sleeves on a couple of dresses — Imelda Marcos redux. Such flourishes pointed to another of Crutchley’s key assets. As committed to the high end of fashion as he is — “the luxury, the glamour of event dressing,” as he calls it — he isn’t inclined to make it easy on himself. There is provocation in his deliberate high/low clashes, like classic British checks wrapped in wild dog. “Looking outside one’s own experience is the way you discover beauty and inspiration…” claimed Crutchley, countering any claims of appropriation. He then added a characteristically spiky coda. “…Which is in no way a comment on our current government.”