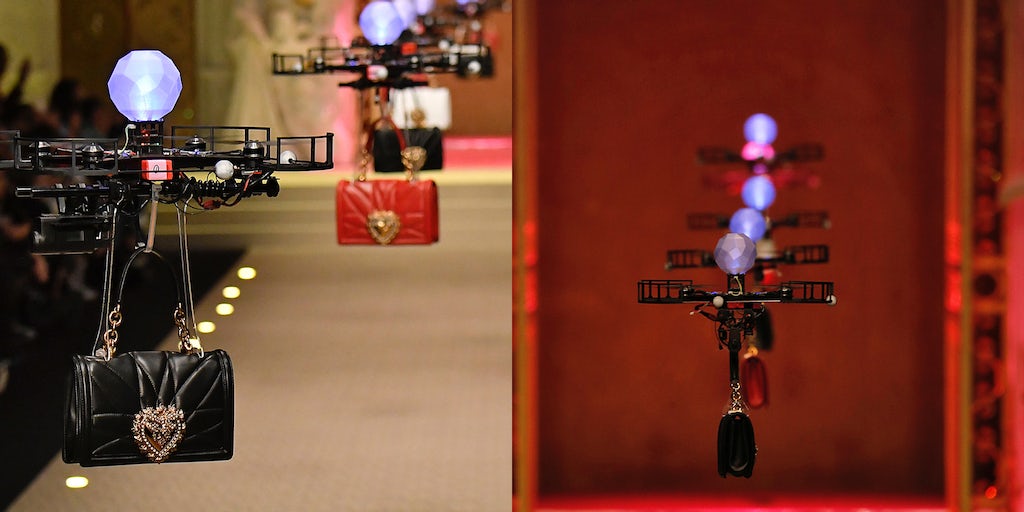 Dolce & Gabbana Used Drones to Carry Handbags Down the Runway Instead of Models (The Verge)
“Seven or so drones flew down the runway, each carrying a leather and jewel-encrusted handbag from the company’s latest Autumn/Winter 2018 collection. Once the drones were done, human models returned to show off D&G’s clothes, proving that perhaps humans aren’t obsolete after all.”

JD.Com’s New Accelerator Focuses on Blockchain Startups (TechCrunch)
“JD.com, one of China’s largest e-commerce companies, is launching a new Beijing-based accelerator programme for artificial intelligence and blockchain startups. Startups will work with its operational teams to test real-world applications of their technologies at scale. This includes its logistics unit, which recently raised $2.5 billion.”

Bitcoin Millionaires Are Coming for Streetwear (GQ)
“Retailers appear to have tapped into a strange overlap between the worlds of cryptocurrency and streetwear. The best going theory is that the twin booms — and the large number of young men who seem to be interested in both — is fuelled by a lack of faith in traditional established systems: luxury conglomerates for streetwear and banks for crypto.”

Nike’s Latest Air Jordan Sneaker ‘Drop’ Showcased the Potential of Snapchat Commerce (Recode)
“Attendees were guided to use the Snapchat camera to scan a code displayed on a basketball-hoop backboard to view the new Air Jordan III ‘Tinker’ sneaker in the app. Guests were then able to purchase the sneaker right within Snapchat with the help of technology from the e-commerce software company Shopify.”

What Does Fitbit Need to Succeed? (Engadget)
“Since 2007, Fitbit has sold more than 70 million devices, from its early, belt-worn pedometers to the wrist-worn activity trackers that made its name. It’s a brand that is synonymous with the wearables market. But the numbers suggest that the huge sales successes of 2015 and 2016 are not going to be repeated.”