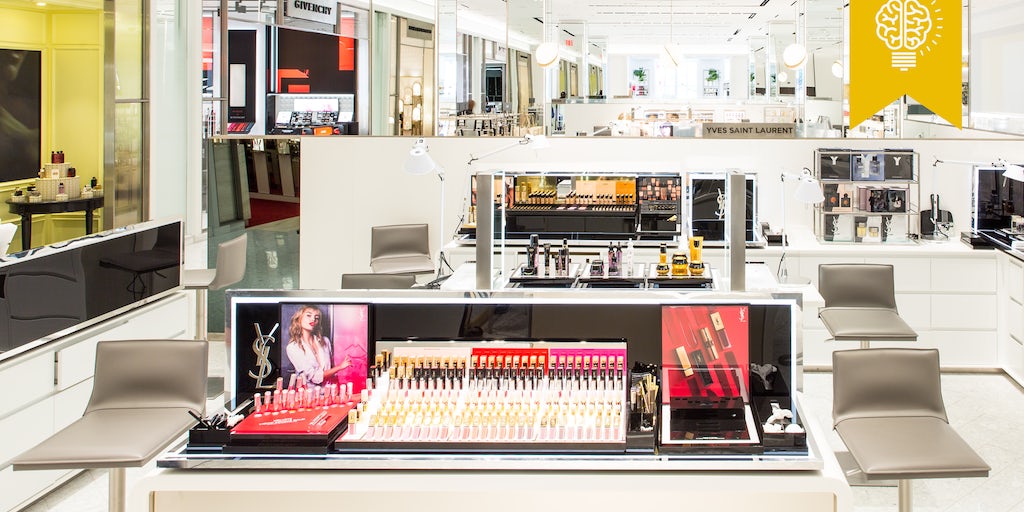 NEW YORK, United States — For a brief window, customers at Saks Fifth Avenue can see beauty’s past and — the department store chain hopes — its future.

Starting Tuesday, shoppers entering the chain’s Manhattan flagship will walk through the original beauty floor, a dark enclave of branded counters that’s in the process of being shut down, to take an elevator one floor up to “Beauty 2.0.” They’ll emerge into a brightly lit, white marble-clad space, with products scattered across a maze of shelves and displays, as well as treatment centres offering facials and body-slimming massages. Mini-storefronts devoted to brands like Gucci and Kiehl’s line the periphery.

Saks is the latest department store chain to put the beauty counter at the centre of its survival strategy. US beauty sales rose 6 percent last year to $17.7 billion, according to NPD Group, and cosmetics displays still draw in crowds at a time when foot traffic in malls and shopping districts is falling. Saks and peers like Bloomingdale’s and Barneys New York count on busy beauty counters to drive sales even as revenue from categories like footwear declines due to intense online competition. Hudson’s Bay Co., which owns Saks, reported declining same-store sales for the chain in 2016 and 2017, though it partially rebounded in the first quarter of this year.

At Saks, high-end skincare has been an “explosive” market in recent years, said Kate Oldham, the company’s senior vice president and general merchandise manager of beauty, jewellery and home. But department store beauty counters are losing traction with consumers, many of whom find the maze of display cases and polished attendants inaccessible and overwhelming. According to NPD, 37 percent of makeup consumers today shop in specialty stores like Sephora and Ulta, compared to 28 percent who rely on department stores.

“The world of beauty has changed — everybody is getting into the business and there are a lot of new players coming in,” Oldham said.

The new department store template is to entice consumers with exclusive services, products and events. Nordstrom and Barneys New York, have introduced natural and wellness categories to their line-up to court health-conscious consumers. Bloomingdale’s targets more niche and independent brands in its millennial-focused Glowhaus section, as does Neiman Marcus with its Trending Beauty Shop.

The new department store template is to entice consumers with exclusive services, products and events.

The goal is to give customers a “sense of discovery” and a reason to repeatedly return to the store, said Gemma Lionello the executive vice president and general merchandising manager of accessories, beauty and home at Nordstrom.

At Barneys, novel product categories like conscious beauty and masks are “attracting a new customer that might not have shopped with us before,” said Jennifer Miles, the company’s senior vice president of cosmetics.

With so much competition swirling, the Saks team decided a total revamp of its beauty counter was needed. That included moving the section up to the second floor, a break with the department store tradition to keep beauty front of house, but the space was bigger (32,000 square feet) and had more natural light. New white fixtures and installations spotlight a wider selection of brands — 122 in total, including 61 that hadn’t been previously sold at Saks, like Aesop, Care/of and Givenchy. While, some, like Aesop, have been given their own boutiques, many of the new brands are relegated to a separate “Apothecary” section in the middle of the store, a concept already in place at other Saks locations.

The floor includes space for events, including fragrance mixing and master classes, as well as 15 spa treatment rooms. A handful of those rooms are dedicated to exclusive branded treatments by the likes of Dior and La Mer. Other highlights include natural face lifting from London-based FaceGym, a flower shop from EB Florals and organic manicures from Sundays Nail Studio. A beauty concierge is available to help locate products and schedule service appointments, and an advisor is on hand to dole out personalised skincare advice.

Not all of these concepts are new: Nordstrom, for example, also employs beauty concierges and stylists, while Target has had brand-agnostic beauty experts working its floors since 2013. The new layout is blatantly reminiscent of a Sephora, though the boutique aspect offers a point of difference.

It could take more than sprucing up the shopping environment to ward off competition.

The goal was to make the space more “fluid,” said Oldham, so that customers could easily shop between categories. The walls are at a low height, so customers can see across the floor, and there’s less counter space so customers can better view the products.

“We felt that if we were going to do something it had to really be a destination,” Oldham said. “We really wanted to have a Saks point of view, so that it’s not just a box of brands.”

Attracting younger customers is also a priority. In addition to a traditional marketing blitz that includes ads on top of taxis and displayed on digital screens across the city, Saks hired digital influencers, including YouTube star Kelsey Simone, to promote Beauty 2.0.

While Saks doesn’t break out sales by product category, analysts estimate the new floor’s first-year sales could reach $90 million. That’s a fraction of Hudson’s Bay Co.’s $14.3 billion in sales last year. But the company, which said last year it would cut 2,000 jobs, is counting on Saks to drive growth, investing $250 million in remodelling the 5th Avenue flagship store.

At Nordstrom, beauty has been a “top-performing category” for several years, Lionello said. But same-store sales grew by less than analysts had anticipated in the first quarter, the company said last week.

“It’s better late than never,” said Larissa Jensen, the executive director and beauty industry analyst at NPD. “[Saks] seems to be elevating it and making it more of a destination and less of a department, which is key.”

Still, these retailers have their work cut out for them to claw back business. Ulta’s sales shot up 21 percent to $5.9 billion in the fiscal year ending in February, and LVMH, which owns Sephora, said the chain gained market share, with particularly strong growth in North America.

Fragrance, however, is still a stronghold for department stores. Fourty-six percent of consumers still shop for fragrance at department stores, compared to only 30 percent at specialty stores, NPD said. This could explain why Saks doubled the space of its fragrance section on the new floor, and why Harrods expanded its Salon de Parfums with seven exclusive new boutiques last year.

It could take more than sprucing up the shopping environment to ward off competition, especially as online juggernauts like Amazon invest in beauty. One problem: the department store concept as a whole falls flat with some consumers.

Shopping by department is just not how people work anymore, we’re all about breaking down barriers now.

“[These stores] are set up incorrectly, down to how they’re named,” said Christopher Skinner, the founder of School House, a creative branding and retail design agency that works with clients like LVMH. “Shopping by department is just not how people work anymore, we’re all about breaking down barriers now.”

NPD’s Jensen said stores could organise merchandise into sections that appeal to different categories of consumer, like those who value environmentally friendly products.

“A consumer who cares about health and wellness, and the environment, shouldn’t have to go to the shoe department to get a sustainably-made shoe or the bag department to buy an ethically-made purse,” said Jensen. “Wouldn’t it be great if it was just all one section?”

Department stores are also giving their websites’ beauty sections a refresh, even as they invest in their in-store experiences. While in-store sales have been flat or declining at many of these chains, including Hudson’s Bay, their online sales are for the most part growing.

Although many of these retailers now offer the Amazon-era requirements of speedy shipping and free returns, their online beauty presence often lags specialty store competitors. Sephora, for example, has its Beauty Insider Community, where customers share tips and tricks on message boards and rack up points for shopping. Its Sephora app offers exclusive previews and promotions, as well as virtual product try-on.

Saks launched its SaksFirst BeautyRewards programme in August, and the company, as well as competitors like Neiman Marcus, is deploying new technology like virtual try-on mirrors in stores. However, unlike at Sephora, customers have to spend $250 to join, and the program lacks the community aspect that has helped to popularise Beauty Insider.

The Canadian department store Holt Renfrew has gone a step further, giving associates the ability to track consumers who shop both online and in person, and regularly incentivises them to stop by a store. It also equips associates with iPads to give customers additional information about products and make checkout easier.

“[Even if changes like Saks’] bring higher volumes of foot traffic through the door today, retailers should ensure that their in-store and digital presences are prepared to take on the emerging trends of tomorrow,” she said.