PARIS, France — The sun-dappled garden of the Ritz may have been the perfect backdrop for the dreamy dresses of Caroline Hu, winner of the inaugural BoF China Prize, established this year in partnership with Yu Holdings. But it was the New York-based, China-born designer’s hand-crafted designs — interwoven from silk, tulle and lace using different smocking techniques — that drew the international fashion community, many of whom were in town for the Couture shows, to the Place Vendôme.

While a mix of top editors (including BoF’s Tim Blanks and Vanity Fair’s Radhika Jones) and executives (including Coty’s Edgar Huber and OTB’s Renzo Rosso) braved the sluggish Paris traffic to make it to the afternoon fête, Hu’s own presence was the most miraculous. (Last-minute visa troubles were overcome at the eleventh hour.)

Hu, fresh off the plane in her signature lens-less glasses, said she was grateful to have the opportunity to come to Paris to meet with members of the international fashion community, including influential players like Colette-founder Sarah Andelman and Pamela Golbin, artist director of Jacquard by Google and former chief curator of the Musée des Arts Décoratifs.

“Showing my designs to the Parisian fashion community has been a dream of mine for a long time,” she said. “I even told my parents a few years ago that one day I must come to Paris.” 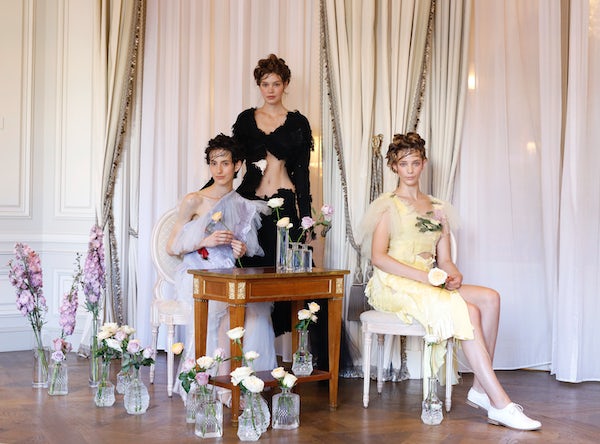 Blanks, BoF’s editor-at-large, spent the hours before Valentino’s grand Couture week finale trumpeting the talent of Hu. “I was glad Caroline was one of the finalists for the BoF China Prize because her presence made the breadth of the local talent so clear,” he said. “Her gowns embody a growing appetite in fashion for the precious artisanal. It’s a more sophisticated manifestation of the customisation craze, of the exaltation of the individual. (This is one of Pierpaolo’s couture tenets at Valentino.) I’m really curious to see where Caroline takes it.”

Hu was raised in Shenzhen, moving to London to pursue a bachelor’s degree womenswear design from Central Saint Martins, and then to New York to attend the MFA programme at Parsons School of Design. After graduating in 2018, she launched her namesake label from New York that same year. On March 29, 2019, she scooped up the BoF China Prize, the first global fashion award dedicated to emerging Chinese design talent. It comes with a slew of prizes including $100,000, a coveted slot at London Fashion Week in September and mentorship from the extended BoF network including companies such as Lane Crawford, OTB and Reebok.

“What I love about Caroline’s work is that it’s romantic with a twist,” said Wendy Yu, BoF China Prize partner and founder of Yu Holdings. Yu was wearing a pink gown that Hu specifically designed for her. “I really love the dress,” Yu said, adding that she archives her most special pieces in hopes of one day building a fashion museum in China. “Thankfully she got her visa last minute!”

Her gowns embody a growing appetite in fashion for the precious artisanal.

“Caroline is not shy,” said OTB’s Rosso, who served on this year’s BoF China Prize jury. He will also mentor Hu over the next year. “We gave the award to somebody who is in love with working with her hands.”

Indeed, the industry was as enthusiastic about Hu’s Parisian debut as the designer was herself. “I had already seen her dresses at the LVMH Prize, but it’s great to see them on models in this setting,” said Andelman, who is now running creative consultancy Just an Idea. “Her work on textiles is unbelievable.”

Hu’s aesthetic, while still developing, is already drawing comparisons to some of fashion’s greats. “Her dresses remind me of Rei Kawakubo’s creations process, but also of the ceremonial clothes created by the women in Senegal,” said stylist Jenke Ahmed Tailly. “There’s also something similar of the Rodarte sisters’ vibe. The composition and shades are so beautiful. I wonder what goes on in this young woman’s mind. Perhaps Tim Burton’s movies?” 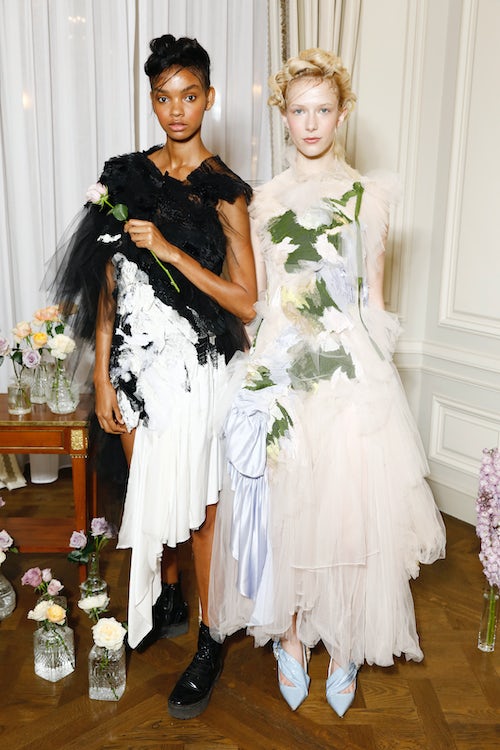 Models in designs by Caroline Hu | Source: Getty Images for The Business of Fashion

Journalist and fashion film curator Diane Pernet said she was “totally enchanted” with Hu’s technique, noting her ability to replicate the atmosphere of an impressionist painting in her weaving process. (One soft yellow ensemble recalled Monet’s Water Lilies, with tufts of tulle cascading alongside painstakingly smocked strokes of lace and silk, forming a vibrant, textural “camouflage.”)

Fellow designers in attendance were just as supportive. “Her work is so delicate, it’s almost like poetry, with an edge and substance and lots of layers,” said designer Mary Katrantzou, whose label is backed by Yu Holdings, noting that it’s encouraging to see a talent coming out of a region where so many Western brands are gaining awareness fast. “There’s a space for that, and it’s great that it’s coming out of China.”

But no matter how serene and magical Hu’s designs may be, nothing in fashion gets made without a little chaos. Just hours before the event, Hu was still searching for the perfect shoes for her models to wear with the dresses. Prize juror and fashion consultant Julie Gilhart, an early supporter of Hu’s, played fairy godmother, connecting the designer with Milanese stylist Ada Kokosar. “Ada was super on it,” Gilhart said. “They have the same spirit.”

It certainly felt like a family affair, with the jurors of the BoF China Prize coming together once again after their pow wow in Shanghai this past March.

“Blue sky, beautiful garden, everybody’s here… It’s amazing,” said designer Uma Wang, a prize juror. “It’s like family. I met so many friends thanks to the Prize. Next week, I will visit Renzo Rosso’s factory in Italy. I am so happy to see his world.”

As for Hu, she is set to show her Spring/Summer 2020 collection on September 17 at the Serpentine Gallery during London Fashion Week. But she will always have a home in Paris. “It was better to have Caroline in person than in a hologram!” said Pascal Morand, executive president of the Fédération française de la couture, expressing gratitude that Hu’s visa was cleared. “Her work is very artistic… and also very couture.”

Yu Holdings is the Principal Partner of the BoF China Prize.

Reebok is the Major Partner of the BoF China Prize.

OTB and Lane Crawford are Mentor Partners of the BoF China Prize.

Mary Katrantzou | Source: Getty Images for The Business of Fashion

Pamela Golbin and Imran Amed | Source: Getty Images for The Business of Fashion

Tim Blanks | Source: Getty Images for The Business of Fashion

Radhika Jones | Source: Getty Images for The Business of Fashion

Nicole Warne | Source: Getty Images for The Business of Fashion

Pascal Morand and Nicolas Santi-Weil | Source: Getty Images for The Business of Fashion

Leaf Greener | Source: Getty Images for The Business of Fashion