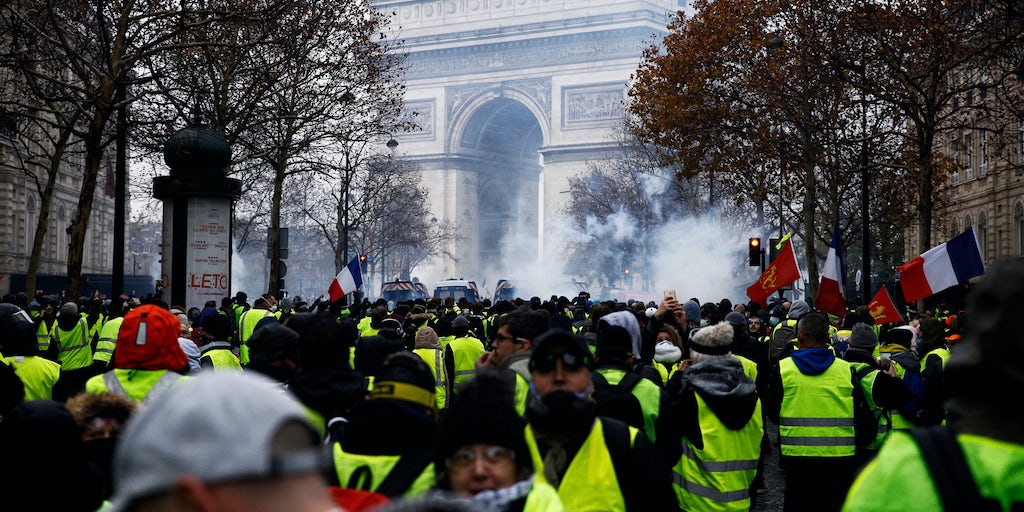 PARIS, France — Shop windows on Paris’ Champs-Élysées avenue were destroyed on Saturday amid another weekend of protests led by the Yellow Vest movement.

Live footage from BFM TV on the iconic avenue showed broken windows of Boss and Lacoste fashion stores, as well as a vandalized Fouquet’s restaurant sprayed with graffiti saying “Sarko broke everything,” a reference to the former French President Nicolas Sarkozy who famously celebrated his 2007 presidential victory at the expensive eatery.

Interior Minister Christophe Castaner condemned the violence on Twitter, saying that masked “professionals of destruction and disorder” infiltrated the protests. Castaner urged police forces to give a firm response to the violence after 44 demonstrators were arrested on Saturday.

BFM reported that some stores on the avenue were also looted as up to 8,000 protesters took to the streets in the French capital. In an interview on BFM TV, Castaner said around 1,500 of these were “ultra-violent,” and ready to cause destruction.

This is the 18th weekend of protests since the so-called Yellow Vests, named after drivers’ safety jackets, started demonstrating around the country from the end of November. The protesters were initially triggered by a planned increase in gasoline taxes, but the movement has morphed into a mixed bag of demands, from the cancellation of a lower speed limit on secondary roads to Macron’s resignation.

The grassroots movement has lost steam in recent weeks as the president reaches out with a series of town hall meetings across France. Macron also pledged an 11 billion-euro ($12.5 billion) package to boost low incomes, which will raise the 2019 budget deficit to 3.2 percent of economic output from a previously expected 2.8 percent.