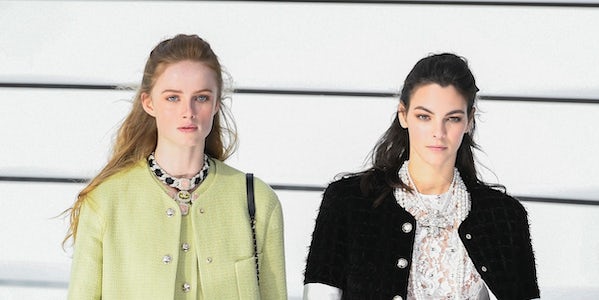 PARIS, France —  A few weeks ago, Silvia Venturini Fendi and I were talking about Karl Lagerfeld’s costume designs for movies. He’d worked on Barbet Schroeder’s “Maitresse,” Silvia’s inspiration for her new collection. I didn’t know. But thinking of Parisian kink made me wonder if Karl might have contributed to Claude Chabrol’s 1968 lesbian noir “Les Biches.” That film is so ripe for rediscovery, it all but demands refrigeration. Alas, no Karl connection, said Silvia. Lagerfeld dressed Chabrol’s muse (and wife) Stephane Audran for many of her other movies, but not this one. (That job fell to lost genius Maurice Albray) But here we were, mere days later, and Virginie Viard was namechecking “Les Biches” in her guidelines for her latest Chanel show. It’s been described as “one of the few films ever made in which the entire story is discernible from the costumes.” That notion of conveying character through clothing drove Viard’s collection.

For a start, she demanded a little more performance from her models than the customary glassy-eyed parade. They walked in twos and threes, interacting, not as much as Sonia Rykiel’s chronically effervescent mannequins, but still suggesting a connection a little less shallow than usual. And the clothes they wore had a kind of scattergun impact, a little bit of this, a little bit of that, almost like — shock! – real people. They didn’t necessarily fit together. Viard said it better: no flourishes, no frills, simple, soft, pure. And, for the staging, no bells and whistles. Or icebergs or supermarkets or small forests. Instead, an abstract landscape. Interpret it as islands floating in a calm sea, with mists rolling across its glassy surface. Or see it as I did. Mirrors and dry ice.

I can imagine Viard feeling the same way. In her year at the Chanel helm, she has asserted a practical bent. Her designs live in a real world, or at least a real-er world than they did. No frills, remember? What there was this time was a hint of an equestrian situation, with jockeys’ armbands a recurring detail. Coco Chanel kept racehorses.

The seven league boots that were shown with everything rather obviated the realness. Folkloric in origin, they are. But Karl wore them. And Viard showed them with trousers that snapped open at the ankle, or up the calf. Super-easy, a bit romantic. Same when paired with tweedy slit skirts, and velvet hotpants with polka-dotted tights. They contributed to a buoyant 70s feel, like a French Vogue editorial from that era coming to life. You could imagine the lives of these women, the dinners, the clubs, the Michel LeGrand music playing in their apartments (as it did on Michel Gaubert‘s soundtrack). Those were the days when black and white dominated in magazines. It did here too, with a leavening of pink and celery green.

There was the odd ghastliness, like the fringed skirt with the padded white fencing vest, the abbreviated gloves and the clutch of gold necklaces, but when wasn’t there that in a collection that has always gloried in overload? Viard has trimmed some of the fat – 100 looks down to 70-ish – and she could remove even more. Still, the most striking thing about this show was how it polarised its audience. The word on a younger generation’s lips was “fresh.” The more senior contingent was resolutely unconvinced. But not this senior. I rather fancied the lack of focus, the continental drift, the freedom of movement. That’s what the freshers were responding to.