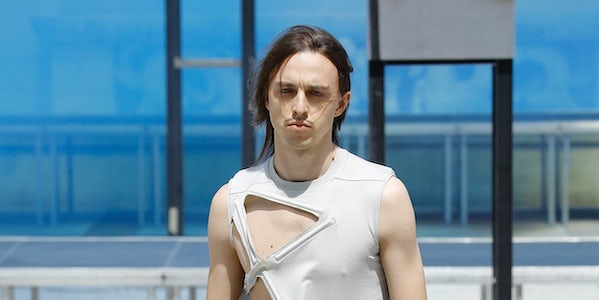 PARIS, France —Rick Owens’s invitation was a face mask. It was a concession to his show’s stunning staging, with models parading around the rigorous monumentalism of the Palais de Tokyo while smoke pots belched sulphurous, brilliantly coloured clouds at the audience. The masks did nothing to ward off the smoke. Still, Owens expressed his distaste for them. “Cautious, pragmatic… they’re the opposite of everything I want to be. I want to be reckless, and I want to build up as many immunities as possible, then die when I’ve used everything up, a bruised, scarred husk.”

Mercifully pre-husk, Owens had some new clothes to show on Thursday. The collection was called Babel, after the biblical tower which God destroyed to sow confusion in the children of men. Confusion, chaos…they’re tentpoles for Owens. But so is control. Striking a balance between the two has been a life’s work for the designer. He found a graphic way to manifest his quest at the close of his latest show with nylon ponchos which will be shipped with aluminium poles that convert their limp formlessness into space-invading geometric structures. They made spectacular showpieces, even if their application to the real world was perhaps more conceptual.

In the context of the presentation however, Owens’s eldritch geometries served to emphasise his affection for Russian Constructivism. You could also see it in the bold stripes, the angular dissections of t-shirts, and the sweeping polyhedron-like capes and coats, which had that sacerdotal quality that is Owens at his most optimistic.

He was actually insisting on his optimism before the show, and there was an upbeat thread in the collection which defied the chaotic conception of Babel. You could feel it in the discipline of the fabulously tailored jackets, in the energy of truncated denims and skirts sported by bare-torso-ed boys, and even in the footwear, a collaboration with Birkenstock. The positivity there may have stemmed from Owens’s note that Birks were “popularly associated with 1960’s American liberalism.” Right about now, that’s a state of mind that would be extremely welcome.

Owens’s optimism even extended to the face masks he claimed to find so dull. Not so dull once he’d attached long, octopoid strands of fabric, turning the masks into sinuous, sinister accessories.