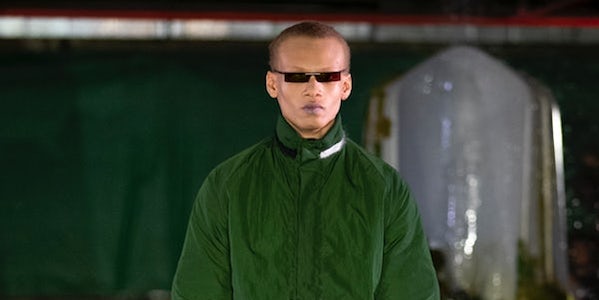 LONDON, United Kingdom — The Internet has irrevocably altered the way people interact physically. Ben Cottrell and Matthew Dainty mourned “the lost art of cruising” in their latest Cottweiler collection. On the catwalk were what looked like two painted porcelain urinals, totems from the prettiest public toilet in the history of casual sex. There were other sly references, like the guy with the dog leash and the ball thrower – a walk in the park a prelude to a pickup – or the finale taking place in a dark shot with headlights, suggestive of things that happen under cover of the night.

Some boys walked with napkins tucked in their belts, a vamp perhaps on old-time cruising’s hanky codes, which made you wonder if that’s what Cottrell and Dainty meant when they talked about a challenge to “traditional masculine dress codes”. And was the muff sported by another model a different kind of innuendo?

Wild imaginings aside, the clothes themselves were sporty and sensual, rather than overtly sexual. There was a precision and dressiness to them that recalled Kim Jones’s fusion of athleticism and formality, which has been inspiring British sportswear designers for more than a decade. Here, the tactile luxe of fabrics like crushed velvet, silk, mohair and shearling elevated the most traditional items (the parkas were a particular standout).

It was a savvy move on Cottrell and Dainty’s part, given that menswear outriders, led by Jones himself, are pointing towards a new era of male elegance. But this Cottweiler collection was also testament to another point the designers made: the power of personal engagement. And nothing engages like a good story, especially when it’s built round an object as provocative as a porcelain pissoir.