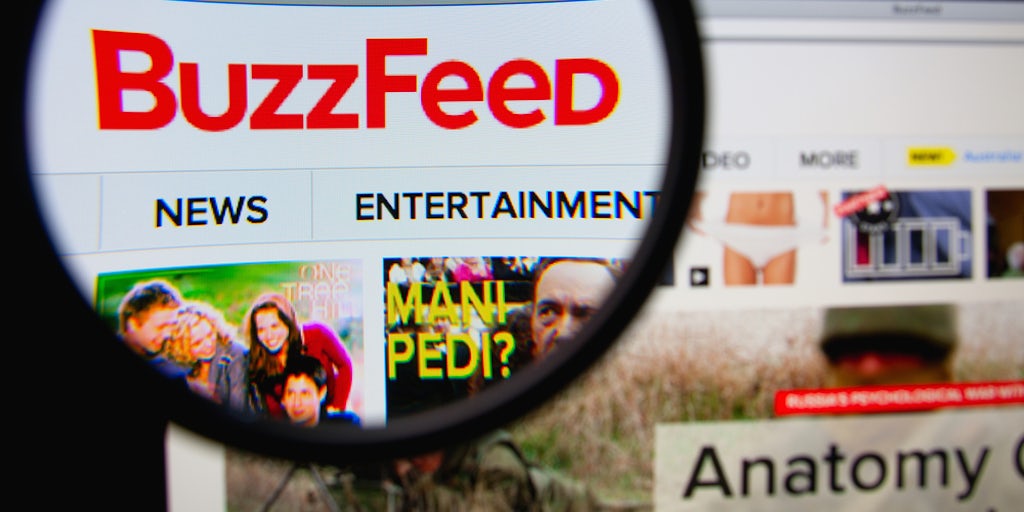 NEW YORK, United States — The digital publishing industry took a big hit in recent days, when more than 1,000 employees were laid off at BuzzFeed, AOL, Yahoo and HuffPost. Vice Media started the process of laying off some 250 workers on Friday, and Mic, a site aimed at younger readers, axed much of its staff two months ago before a competitor bought it in a fire sale. Coupled with recent layoffs at Gannett, the company behind USA Today and other dailies nationwide, the crisis in the digital sphere suggested that the journalism business was damned if it embraced innovation and damned if it didn’t.

The cuts at BuzzFeed were the most alarming. Wasn’t this the company that was supposed to have it all figured out? Didn’t its team of wizards, led by the M.I.T.-trained chief executive, Jonah Peretti, know tricks of the digital trade that lay beyond the imagination of fusty old print publishers?

Chris Hayes, the author and MSNBC anchor, summed up the bleak outlook with a

What if there is literally no profitable model for digital news? Or none that actually scales and endures without, say, the established readership base and brand of the NYT. This seems…increasingly likely to me?

” rel=”nofollow”>tweet that asked, “What if there is literally no profitable model for digital news?”

The in-the-moment doomsaying was understandable. But look past the gloom, and a complicated narrative emerges that does not lend itself to a one-size-fits-all interpretation of What Went Wrong or a handy forecast of journalism’s future.

While leading digital publishers have resorted to harsh measures, legacy titles such as The Washington Post, The Atlantic, The New Yorker and The New York Times have seen growth as they accommodate the habits of their increasingly digitally oriented readers.

At the same time, a digital-native business, Vox Media, the owner of The Verge and Eater, turned a profit last year, its first as a large company, according to two people with knowledge of the matter who were not authorized to discuss it publicly. And a more recent digital upstart, Axios, a buzzy site for Beltway insiders created by the founders of Politico, expects a profit in 2019, according to its chief executive, Jim VandeHei.

Even BuzzFeed may hit its financial marks this year. If it does, the reason will most likely be a combination of old-school business methods tried elsewhere (including layoffs), rather than its ability to crack some esoteric digital code.

Going Around Facebook
It was simpler in the days of print. Even when radio and television laid waste to certain newspapers and magazines, the industry as a whole racked up steady profits. Twentieth-century readers were more or less unchanging in their habits, so media executives did not have to revise their business models much from year to year.

That has changed, to say the least.

Mr. Peretti seemed to be on the right track with his reliance on sponsored posts to generate revenue before his reluctant pivot to banner ads last year. That money encouraged him to stick to his idea of creating free content that readers can’t resist sharing on social media. Hedging his bets, he varied BuzzFeed’s money stream by selling branded cookware in association with Wal-Mart and opening a toy store in Manhattan.

The company’s revenue grew more than 15 percent in 2018 — not quite enough to stave off Mr. Peretti’s decision to cut about 220 of BuzzFeed’s roughly 1,500 employees. As he put it in a recent staff memo, “Unfortunately, revenue growth by itself isn’t enough to be successful in the long run.”

Ben Thompson, an analyst who has become a favorite among the Silicon Valley set, argued that BuzzFeed had inadvertently devalued its content by mostly relying on the kindness of digital giants to distribute its articles.

Facebook’s changes to its News Feed in recent years increased the visibility of posts from your aunts and uncles while playing down articles from professional publishers. That was no good for sites like BuzzFeed.

“The only way to build a thriving business in a space dominated by an aggregator is to go around them, not to work with them,” Mr. Thompson wrote in his Jan. 28 newsletter.

Digital Revolution? More Like Evolution
In BuzzFeed’s youth, Facebook was not the dominant traffic driver it is today, and online sharing was just as likely to occur away from social media platforms. (Remember email?) Five years into its existence, in 2011, the site got newsier, with the addition of Politico’s Ben Smith as its editor in chief, along with a team of editors and reporters. In 2015, Mr. Thompson, the analyst, called BuzzFeed “the most important news organization in the world.”

After that, Mr. Peretti adjusted his approach again. He determined that Facebook had already built the pipes for distribution, so instead of trying to amass audiences around a single venue, like BuzzFeed.com, he went where the audience was: Facebook.

That was back when Facebook was considered a natural ally for media organizations seeking millions of online readers, and before Mark Zuckerberg, its chief executive, was made to testify before skeptical lawmakers in Washington and Brussels.

So publishers didn’t balk when Facebook asked them — as part of its plan to take on YouTube — to go big on video. Companies like BuzzFeed, Vox Media and Refinery29 had an additional incentive to go along with Facebook’s request: the ad dollars that had shifted online as viewers started to favor streaming services over traditional television.

The plan proved difficult to monetize, however. Facebook wanted brevity, but it defied common sense to load a 15-second commercial in front of a 30-second clip, Mr. Peretti said in a November interview with The Times.

In 2017, Facebook created a new section, Facebook Watch, that featured longer videos. The company also opened more of those videos to advertising last August. For publishers, it was an improvement, but still not enough.

“They need to make a lot more progress to truly compensate for the value that media companies are creating for them,” Mr. Peretti said in the interview. He compared Facebook to cable operators like Comcast, which pay programmers to carry their shows. “Except the compensation isn’t like cable,” he added.

As television viewers continued their migration to the web, big TV companies like NBCUniversal, Turner Broadcasting and Discovery Communications followed them, plowing hundreds of millions of dollars into digital companies.

Now they would like to see a return on their investments. And they are getting impatient.

Old-School Digital
It wasn’t supposed to be this hard for digital publishers.

In 2011, when The Times drew criticism for its decision to charge online readers, creating a so-called paywall, BuzzFeed was taking off, thanks to its knack for harnessing the power of social networks. In that context, the paywall strategy struck media gurus as the last-ditch gambit of a slow-moving stalwart, and the conventional wisdom was that digital mastersmiths would soon outperform or perhaps even vanquish their print-beholden rivals.

By the end of 2018, the picture looked vastly different. BuzzFeed generated more than $300 million in sales, while still bleeding money, and The Times was on a pace to exceed $650 million in digital revenue.

A stormy sociopolitical climate played to the strengths of seasoned media companies. John Wagner, who handles ad spending for publisher properties for the media agency PHD, said that during the Trump presidency, advertisers had favored venerable publications like The Times, The Washington Post and The Wall Street Journal. News sites of 21st-century vintage, on the other hand, have to keep proving themselves.

“BuzzFeed has really good offerings,” Mr. Wagner said. But its listicles and quizzes, he added, may eventually fall out of favor. “Consumers are fickle, and they’ll move on to the next thing,” he said.

Mr. VandeHei of Axios said media companies needed more than digital savvy to make it in the current cutthroat environment. “I think media is still a great business, if you run it like a damn business,” he said in an email.

Mr. VandeHei recited a litany of plagues on the digital houses, such as taking investments from venture capitalists expecting big returns in a short time or tying audience growth to platforms like Facebook.

With its reliance on sponsored newsletters, Axios has a business model wildly different from BuzzFeed’s. (“I’m an outlier,” Mr. VandeHei said.) But while a comparison of the two companies may not be apples to apples, the debate over journalism’s future comes down to which business model works better — or works at all.

Axios generated more than $24 million in revenue last year while incurring an overall loss of $56,000, Mr. VandeHei said. He credited a simple reason for its success: “The audience for high-quality content is huge and voracious and growing.” And the company’s focus on newsletters means it is unaffected by the whims of Facebook.

The Information, a San Francisco tech-news site founded in 2013, is another digital publisher that adopted an old-fashioned business model from the start: paid subscriptions.

“Journalism has been paid for since its early days,” Jessica Lessin, the founder and chief executive of The Information, said in an interview. From her perspective, the tendency of news media executives to give their content away once they moved to the web was the result of something like amnesia.

“We just forgot,” she said. “We all went online and threw that out.”

Ms. Lessin, a former reporter for The Wall Street Journal, declined to disclose the exact number of readers who pay $399 annually, but said the publication had “tens of thousands of subscribers.” While that audience is relatively modest, it allowed her to double her staff last year to 26 journalists.

“Subscription is a great business,” Ms. Lessin said. “We are covering and expanding at the pace we want to expand off subscription, since that revenue can be very predictable.”

While BuzzFeed and HuffPost have remained anti-paywall, and Axios and The Information have depended on sponsorships or subscriptions, Vox Media has found a middle way.

Jim Bankoff, the company’s chief executive, is more business oriented than his peers and rarely calls attention to himself. A former AOL executive, he has explored areas outside of traditional advertising as part of his approach.

One result was a production agreement with Netflix for a series based on Vox’s explanatory journalism, “Explained.” The company has also generated revenue by building its conference business, getting into podcasting and licensing its content management system, Chorus.

Last year, its revenue increased 20 percent to around $185 million, for a modest profit. But that doesn’t mean Vox has stumbled onto some wild innovation.

“We don’t see ourselves as a digital media company,” Mr. Bankoff said. “I mean, is anybody only just that now? We’re a modern media company.”

By Edmund Lee. Jaclyn Peiser contributed reporting. This article originally appeared in The New York Times and was legally licensed through the NewsCred publisher network.