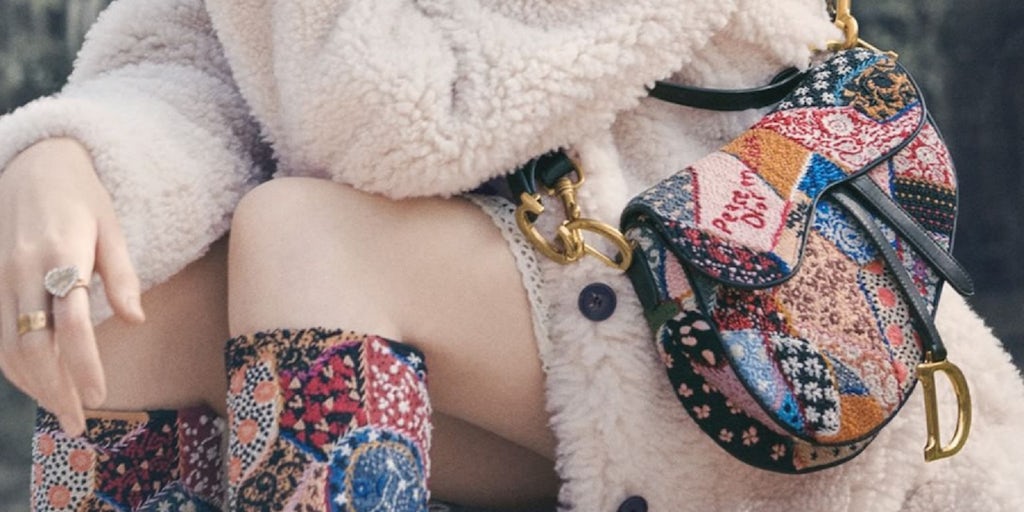 PARIS, France — Beyonce’s a fan. So was Carrie Bradshaw on “Sex and the City.”

Excitement for the return of Dior’s equestrian-inspired Saddle bag line — which dominated the “it bag” era of the early 2000s alongside Balenciaga’s “Lariat”  and the Fendi “Baguette” before being discontinued — has been bubbling up since designer Maria Grazia Chiuri put them in her runway show in February.

Then, last week, just as Europe’s other fashion houses were winding down for their summer recess, Dior unleashed the bags in a marketing blitzkrieg that was hard to miss: Scores of Instagram influencers from around the world posted images modeling the $2,000-plus bags on the same day that Dior released its own campaigns, with models posing against vintage cars on the streets of Paris.

Vogue and Marie Claire published dreamy videos from Dior’s ateliers of the bags being hammered into shape on wooden molds. On the Chinese social network Weibo, Dior took a more literal approach, posting a clip of Hong Kong fashion star Elle Lee posing as an elated client in front of a shop mirror. Some of the Instagrammers acknowledged that they’d been gifted the bags using hashtags like #SuppliedByDior.

Making a splash with new product launches is becoming more important and more challenging for luxury brands as social networks become more saturated with fashion images than ever. The prestigious airs that top-end labels have spent decades cultivating are increasingly seen as a mere prerequisite.

For LVMH, whose brands including Louis Vuitton, Fendi and Celine are among the world’s most established, new product launches are essential to keep up growth — and to maintain their lead on fast-growing challengers like Kering’s revamped Gucci and Balenciaga divisions.

“Consumers are asking now for ongoing novelties,” Equita SIM analyst Paola Carboni said of the move to push the bags in a big summer “drop,”  outside the usual fashion calendar. “It’s consistent with the changes in creative direction at LVMH — the idea is to renew the offer on a constant basis.”

With retro logos and reissues of archival designs driving the fashion conversation by tapping into customers’ nostalgia — as in Versace’s Tribute collection — it’s no surprise that many designers are feeding the hunger for new products by reviving old standards rather than risking big ad dollars to promote an untested product.

“The Dior Saddle bag is a perfect product to relaunch today,” said Katy Lubin, communications director at the fashion search engine Lyst. “It’s instantly recognizable on Instagram, plays into the logomania trend, and it comes with a serious dose of early-aughts nostalgia.” LVMH said in May it would take a minority stake in Lyst.

Since the campaign went live last week, web searches for Dior Saddle bags are up nearly 1,000 percent on Lyst, Lubin said. “It will be interesting to see if such a big-bang launch campaign will speed up the product’s life cycle — if it’s already everywhere then how long before it’s over?” she said.

Second-quarter sales at LVMH grew 11 percent on an organic basis, the company said Tuesday — rapid growth for a company with more than 4,000 stores—but well short of the 40 percent growth analysts are predicting for Gucci, whose parent company Kering reports Thursday.

In a bid to keep its edge, LVMH has reshuffled its management over the past year — putting a new CEO and menswear designer in place at Christian Dior Couture, moving Dior’s veteran chief Sidney Toledano to oversee LVMH’s smaller labels, and expanding and revamping Celine under the star designer Hedi Slimane.

Designer Virgil Abloh, who rose to prominence as creative consultant to Kanye West and runs the cult streetwear brand Off-White, showed his debut collection as head of Louis Vuitton’s menswear in June. The push for new products has gone beyond seasonal fashions and handbag launches: Last year LVMH went so far as to create a new make-up brand from scratch in partnership with Rihanna. LVMH Chairman Bernard Arnault has said that brand, Fenty Beauty, is on track to reach 500 million euros in sales this year.

Arnault combined Christian Dior Couture with LVMH  last year after owning it through a separate holding company for decades, and the fashion house has been pushing up reported sales for the luxury conglomerate this year, helping to offset a spike in the value of the euro that risked dragging down profits.

The Saddle bag blitz is one of the first moves at Dior by CEO Pietro Beccari, who took the helm this year after previously running LVMH’s Rome-based Fendi brand. Beccari won acclaim there for pushing the brand’s image upmarket with “haute fourrure” (high fur) fashion shows that showed off their most elaborate fur creations while at the same time filling stores with more commercial merchandise, like t-shirts and handbags decorated with pointy eyes and tufts of fur to look like monsters.