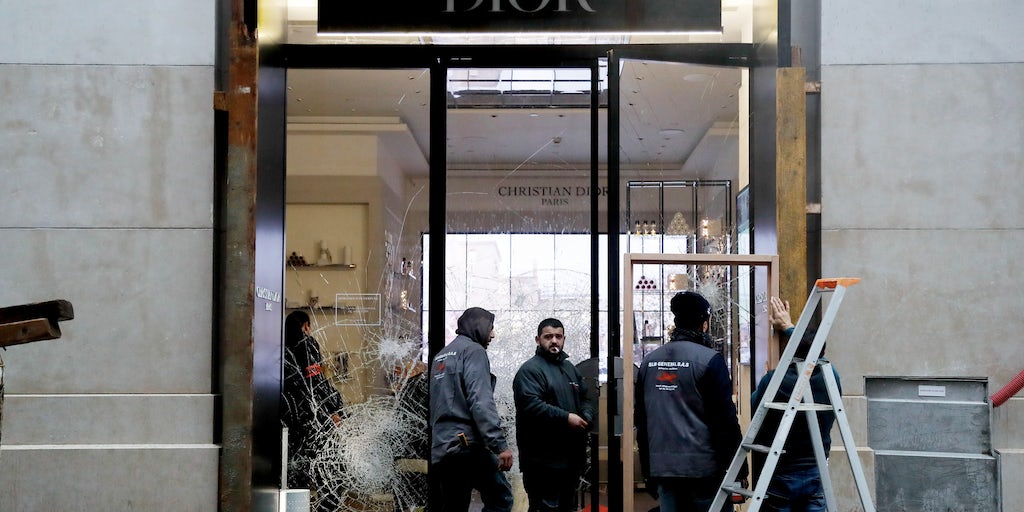 Workers repair the Dior shop window on the Champs-Elysees avenue in Paris after a rally by yellow vest protestors | Source: Getty Images

PARIS, France — Christian Dior is bringing forward its men’s fashion show in Paris to avoid “yellow vest” protesters who have fought police, torched cars and smashed up shops over recent weekends, a source familiar with the decision said.

Dior, part of the LVMH luxury goods conglomerate, wrote to guests to reschedule a menswear catwalk show initially planned for January 19 — a Saturday, when protesters have tended to converge on Paris and other big cities across France.

The show will instead be held on Friday, January 18.

Upmarket Dior and Chanel boutiques were among those vandalised by the protesters in early December.

The “yellow vest” revolt, driven by high living costs and frustration at President Emmanuel Macron’s leadership, shows scant sign of abating after two months of unrest, even after he made some tax and minimum wage concessions.

Retailers and hotels were hit particularly hard by the Paris demonstrations in the run-up to Christmas. Department stores and luxury boutiques shuttered their outlets when protests descended into riots in early December, and tourists cancelled bookings.

The source familiar with Dior’s decision said the brand was keen to avoid the Saturday street marches.

While turnout at the protests has fallen from early weeks, they have been consistently marred by violence and transport has been disrupted.

Macron’s government has said it will crack down harder on unauthorised protests and get tougher on anyone who loots or vandalises shops and monuments.

Retailers had by late December lost around €2 billion ($2.3 billion) in revenue since the protests began, according to the French retail federation (FCD), which regroups everything from big supermarkets like Carrefour to toymakers and luxury brands.

Department stores and other shops are hoping to make up for lost business as the January sales kick off.

Fashion weeks, which attract crowds of specialist buyers and industry fans, are also an important source of income for Paris, home to some of the world’s more prominent high-end labels.

The menswear shows follow others in London and Milan, and precede the womenswear season of presentations running through February and early March.

The French fashion and haute couture federation that organises Fashion Week in Paris said it was working with state authorities to ensure the presentations run smoothly and take place “in the best possible conditions.”