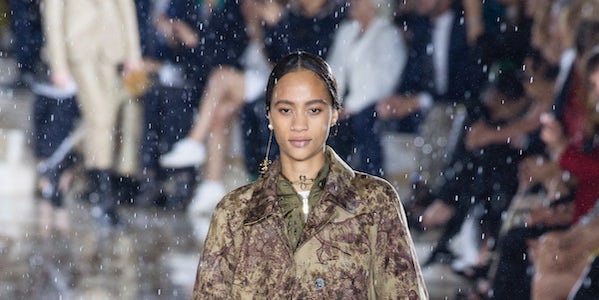 PARIS, France — “Tension?” Maria Grazia Chiuri was reflecting before her cruise show for Dior on Friday night. “This is a word I like.”

Look no further for tension in Chiuri’s latest than the swathe of virginal white cotton dress restrained by a black leather bustier. You could even say that such a notion has been her contribution to Dior’s design lexicon. Aside from the fact that her tenure hasn’t been without controversy, there’s also been the not yet fully resolved dialogue in her work between severity and sensuality, between tomboy and woman, between reality and dream. That was particularly true with this new collection, where the magic realism of Isabel Allende’s novel The House of the Spirits was one inspiration.

Chiuri feels the fact that the cruise schedule exists outside the usual fashion calendar allows her to “create a moment”. On Friday, that meant not only Allende’s spirits (the author was sitting in the front row), but also a performance by a team of escaramuzas, the horsewomen who compete in charrería, Mexico’s national sport. At the very least, their presence allowed Chiuri another of her graphic elisions: DIORODEO.

She learned about the escaramuzas from her Mexican designer friend Victor Alfaro, with a recent piece on Vogue.com filling in the gaps. The equestrians could have been made for Maria Grazia. Women competing without compromise: none of the stiff denim or leather of conventional rodeo competitors, instead, these women were performing their tightly choreographed moves on horseback while dressed in lace and embroidered cotton costumes scrupulously based on the clothes worn by the female warriors of the Mexican Revolution.

Chiuri winkled out connections with Christian Dior himself, for instance, an asymmetric skirt style from the archives (tellingly named Amazon) which allowed for the sidesaddle riding favoured by the escaramuzas. And Dior’s embroidery and lace, of course. In the excessive spirit of cruise presentations past, it wouldn’t have been a surprise if Chiuri had winged her audience to Mexico. Instead, she showed in the grandly named Great Stables of the Chateau of Chantilly, thirty miles outside Paris. It’s home to the Living Museum of the Horse. And the town is world-renowned for its lace. Harken to The Big Bopper: “Chantilly lace and a pretty face, and a pony tail a hangin’ down…”.

For the show, Guido Palau made ponytails that would have gladdened the heart of a dressage judge. And Maria Grazia updated the lace: carved it out of black leather, cut it into a little strapless dress cinched with a fabulously embroidered belt, flounced it into full skirts that swung insouciantly, even with the rain that pelted down. I didn’t mention that. The show took place in a storm. The escaramuzas remained mounted in the centre of the arena, proudly poised with matchless dignity while rain drenched their clothes, their wide-brimmed Stephen Jones hats, and their noble steeds. It was heart-breakingly poignant.

That show-must-go-on aspect also underscored the steeliness in Chiuri herself. The classicism that Dior represents is hers to subvert. Like the toile de jouy pattern that embellished this collection. Usually, it depicts unthreatening pastoral scenes. Chiuri stocked hers with wild beasts. And her Dior woman stomped through the puddles in flat boots, rather than having to manoeuvre on any heel higher. There was a femininity in the tiers of tulle, but it was shot through with something militant, finding full expression in the white poplin shirts with the narrow black ties. Haute tomboy!

It undoubtedly yields a fierce new take on Dior’s fabled legacy. But all the while, Chiuri is inspired by an intense reverence for craft in the tradition of couture. Six hundred embroiderers worked on the skirts, the tops, the belts and hats of this collection. They’re continuing the millennia-old traditions of work done by communities of women around the world. Chiuri hopes her clothes can communicate the value that comes from such continuity. “I don’t want only image,” she said on Friday. “I want women to go into a store and find beautiful craftsmanship that gives them an emotion.”

Beauty of a kind she is undoubtedly offering, but it is somber. And you can’t only blame the rain. Chiuri radiates seriousness of purpose. If she could add some effervescence, she might just be unstoppable.

Is Dior Ready for a Revolution?

How Christian Dior Is Training Its Next Generation of Craftsmen