TORONTO, Canada — The other morning, I found myself face to face with an avalanche.

Surrounded by whistling winds, my breath hovered visibly in 10-degree air and my toes tingled underneath icicles. As the sprinkles of snowflakes flying at my face quickly escalated into a winter storm, Lance Mackey, a champion American dog sled racer and Canada Goose ambassador, spoke gently into my ear.

“Time moves differently when you’re at the edge of the world,” Mackey murmured. “Preparation and instincts are all you have because when everything can change in an instant, you don’t have time for second-guessing.”

The avalanche hitting me was bearable — not just because it was simulated inside a freezing, soundproof room, complete with man-made snow, surround-sound speakers and vivid LED screens, but also because I was decked out in a $1,100 Canada Goose jacket that kept me nice and toasty. A jacket that I couldn’t take home.

Welcome to The Journey, Canada Goose’s 20th store. The outerwear brand, known for its pricey, fur-lined hooded parkas and signature arm patch, will open its latest location Thursday in Sherway Gardens, a luxury mall in the suburbs of Toronto. 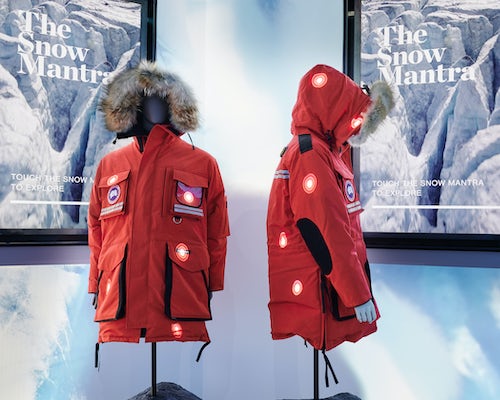 Customers can experience “cold rooms” in other Canada Goose stores. The Sherway Gardens shop is the only one where they can’t walk out with the coat afterwards; much of the space typically devoted to racks of jackets is occupied by “experiences.”

In addition to the avalanche, shoppers can walk across floors that look and sound like cracking ice or sit inside the Elements Room, where dramatic winter landscapes are projected onto the walls. Even the jackets on display are wired into the experience; sensors will produce content on nearby screens when touched.

Only at the exit will shoppers have the opportunity to actually buy a coat, via screens displaying Canada Goose’s website. Store associates stand by with mobile devices that will handle purchases, which are shipped to customers’ homes.

“We wanted to take people out of the mall environment and give them a sense of how we’re a performance luxury brand,” said Canada Goose chief executive Dani Reiss, sitting on a bench inside the store, surrounded by images of snow-capped mountains. “It’s a way to immerse people in the authenticity and the history of Canada Goose.”

Canada Goose is the latest brand to prioritise “experiential retail” over the usual racks of clothes and back rooms full of inventory. The concept, known in retail as a showroom, was popularised by Bonobos at the beginning of the decade, but has since been tested — and in some cases, aggressively adopted — by brands ranging from Nordstrom to Warby Parker, M.M.LaFleur and Suitsupply.

We wanted to take people out of the mall environment and give them a sense of how we’re a performance luxury brand.

The goal is to give consumers new reasons to visit stores, now that most brands’ inventory is easily shoppable online. Inventory-free stores can help brands escape the expenses that come with trying to figure out how much product is needed to fill store shelves. Those resources can instead be put toward developing an in-store experience that drives brand loyalty.

“People still want to come into stores, but new experiences are what will build personal connections,” said Jessica Ramirez, retail research analyst at Jane Hali & Associates. “The new reality of a store is that it’s there for an experience, not just to shop. And the stores that aren’t engaging in that way are either empty or gone.”

An experiential concept to face off with competition

For Canada Goose, the new showroom concept is part of a wider effort to extend the uber-expensive winter coat boom that is closely identified with the brand and Italian rival Moncler. It will also help grow the company’s direct-to-consumer business at a time when wholesale has become a less-desirable channel for many brands.

Canada Goose’s origins date to 1957 when it sold coats under the name Metro Sportswear for park rangers and police working in frigid Arctic weather.

Reiss took over the company in 2001 from his father, then the company’s owner. He convinced high-end stores to stock its coats, and celebrities to wear them. Canada Goose jackets were spotted on Drake, Daniel Craig and Rihanna, as well as on the set of HBO’s “Game of Thrones” and by attendees at the Sundance Film Festival. Kate Upton even wore one — and not much else — on the cover of Sports Illustrated in 2013.

Sales soared as the brand became a status symbol, from $3 million in 2001 to $403 million in 2017, the year Reiss took Canada Goose public. Shoppers who once settled for cheaper outerwear from brands like The North Face now splurged on Canada Goose, which also touts its “Made in Canada” bona fides. Ongoing battles with animal rights activists over its copious use of fur and duck down, including picketing outside stores, have done little to dent the brand’s image. A line to enter a Canada Goose store in Beijing in December 2018. | Photo: Getty Images

Canada Goose is now its home country’s largest luxury brand by sales, which hit 830.5 million Canadian dollars (about $635 million) in the year ending in 2019.

But competition is picking up. Moncler has courted fashion’s elite and reported sales of over $1.5 billion in 2018 in part due to its wildly popular, limited-edition monthly drops. Fellow Canadian brands like Moose Knuckles, Mackage, Rudsak, Wuxly and Kanuk offer expensive parkas of their own. Mainstream fashion brands like Everlane, Tommy Hilfiger, and Abercrombie & Fitch now sell performance outerwear, as do luxury labels Balenciaga, Prada and Gucci.

Some analysts and investors are skeptical that luxury outerwear sales can maintain their momentum. In May, Canada Goose’s stock tumbled 26 percent after it reported that its annual growth rate had dropped from 40 percent to 20 percent. Canada Goose, which relies on third-party retailers for 52 percent of sales, is vulnerable to the downturn in wholesale that has hit luxury department stores hard.

The new reality of a store is that it’s there for an experience, not just to shop. And the stores that aren’t engaging in that way are either empty or gone.

With The Journey and other in-store experiences, Canada Goose aims to set itself apart in this increasingly crowded category.

“Some of the other brands, they have the same price point, but are actually designed in Canada, made in China,” said Sam Poser, a senior analyst covering footwear and apparel at Susquehanna. “And so anything they can do to tell the brand story will enhance its authenticity.”

The Pros and Cons of a Zero-Inventory Store

The showroom model isn’t for everyone.

Big-box retailers like Target, Walmart and Kohl’s have taken the opposite approach, and are having stores perform double duty as distribution centres to fulfill e-commerce orders.

Brian Bolke, the founder of the Conversatory, a specialty store inside New York City’s Hudson Yards, opened in March with a no-inventory concept but pivoted weeks later to a model where he is both consigning products and purchasing them at wholesale.

Call it the Amazon effect; customer perception is that everything is available and that they should be able to get anything, any time they want.

“We found quickly that customers actually just want to take things home,” Bolke said. “Call it the Amazon effect; customer perception is that everything is available and that they should be able to get anything, any time they want.”

The Conservatory relied on brands to ship purchases. But Bolke added that the logistics of an inventory-less store can be difficult.

“You might see something sold in stores, and think it’s in stock, but it could be gone online in three to four hours,” Bolke said. “You need to control the logistics to nail this formula.” 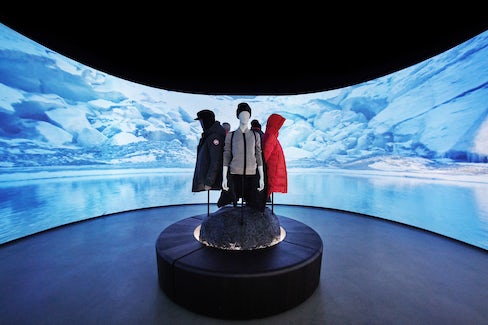 But some experts believe stores that don’t carry inventory can “supercharge customers.” Shoppers who browse showrooms can spend up to 60 percent more and tend to buy more expensive items, according to a study on the model published by Wharton School of Business, in collaboration with Harvard Business School and Idea Farm Ventures.

Customers who visit inventory-less stores are less likely to make a return — one of retail’s pain points —  because they’ve spent more time with products and are more likely to develop a “richer relationship” with brands, according to the Wharton study.

This model can also streamline logistics. Distribution centres can be organised around shipping to customers’ homes rather than stocking stores.

In the showrooms, workers can spend their time helping customers instead of unpacking boxes and stocking shelves.

“Cash is tied up in every product you stock,” said Sonia Lapinsky, managing director in AlixPartners’ retail practice. “It’s the benefit of retail without the full risk of its costs.”

Experimenting in Retail for Data

Reiss, of Canada Goose acknowledged there could be risks associated with its latest retail concept, but said the company wanted to test new retail formulas. Plus, the brand must continue to experiment in order to grow its DTC business, as wholesale partners like Barneys, Bergdorf Goodman, Neiman Marcus face a shaky future in the declining department store world.

If an inventory-less store doesn’t do it for purchases, there’s still plenty of data to be collected. In-store surveillance technology will monitor foot-traffic movements and determine what is working inside the store — a common practice amongst retailers today.

Canada Goose is also anticipating lines to get into The Journey, and so retail associates will be collecting email addresses for shoppers to appointments to visit the store. From there, the brand will be tracking if the experimental store concept will actually translate to sales.

“In this ever-changing retail environment, it’s important to try new things,” Reiss said. “Consumer behaviours, how different customers respond, how people can really learn about the brand in a new way. The way people are shopping today is changing because of the internet and it’s important for us to be at the cutting edge of those changes. We don’t know if this will be a commercial success yet, but we won’t know unless we try.”

How the Puffy Vest Became a Symbol of Power