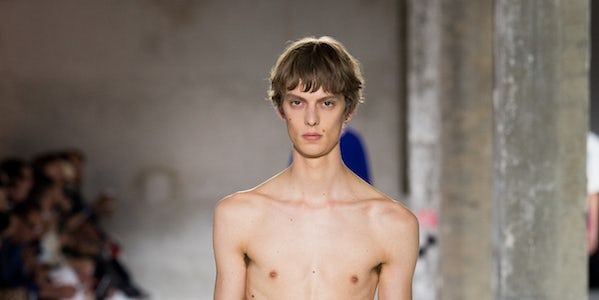 PARIS, France — Dries Van Noten had an eloquent reaction when he heard that Miuccia Prada had used Verner Panton’s inflatable plastic cubes as seating for her show in Milan: “Oh, shit!” His new collection was a collaboration with the late Danish designer’s family, so maybe it stung to find out that he wasn’t the only person this season to fall for Panton’s optimistic, synthetic vision of the future. It’s like they say about London buses: you wait forever then two come along at once.

But Miuccia just made seats, while Van Noten was offering a ticket to ride through the world that Panton created. It was a deep dive: colours, patterns, textures, the collaboration detailed on the collection’s labels. The estate gave the designer permission to play with Panton’s signatures, to re-size or intensify them as he saw fit.

His first stop was colour, rich oranges, deep browns, gradations of yellow and blue that embodied the bold optimism of the early, pre-psychedelic 60s. Then Van Noten added the undulating patterns that defined Panton’s interiors, and large graphic prints of his hand. The Dane did all the heavy lifting here.

After his last show, Dries announced to his team that he wanted his next presentation to open with a boy in a bathing suit, a basic blank slate, in other words. This week’s announcement that Van Noten has sold a majority share of his business to the Spanish conglomerate Puig cast a brighter light on that declaration. The show did indeed open — and close — with a boy in a bathing suit, and the simplicity of that statement defined everything that came after.

The clothes emphasized utility, with an elegant twist, as in an ivory cotton suit worn shirtless, or a matching shirt and pants, which suggested themselves as a different kind of summer suit option. The sumptuous colour of nylon coats evoked Panton’s pop art lighting schemes. Optimistic, yes, but again, they were essentially simple pieces. You could construe that as Van Noten laying down a solid, accessible foundation for whatever comes next with his new business arrangement. The presence of accessories (i.e. bags) in the show was certainly noticeable.

He said he’d been wondering what music Panton would listen to. The soundtrack for the show was a re-edition of Jaydee’s 1992 techno classic “Plastic Dreams.” Perfect in every way.