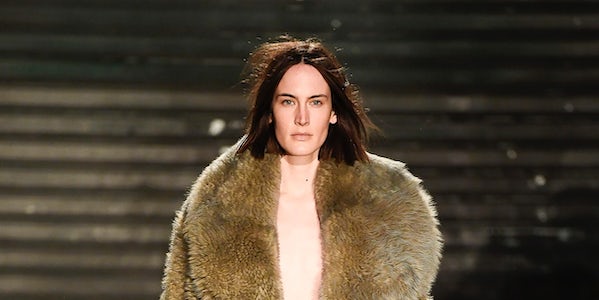 NEW YORK, United States — Much of the charm of Eckhaus Latta’s early collections was that they were naive, a little pretentious perhaps. But stop there, and you just have art-school clothes. Much of the label’s promise is in its potential to contribute something more to the fashion lexicon — and sell larger volumes of clothes along the way.

Young designers rarely break through when they hit the crossroads of concept and commerciality. Sometimes, they stumble out the other side with flat collections that spark little interest in viewers. But sometimes, just sometimes, they emerge bigger and better, making us think harder and desire their clothes even more.

On Saturday, Mike Eckhaus and Zoe Latta showed at an industrial warehouse in the depths of Bushwick, the rusty walls softening the light on the runway. The casting was deliberate as ever, the music as vital. (Laurel Halo’s ‘Who Won?’ had a hypnotic, ASMR-like effect.) But something was different. This season was at once more polished and more nuanced; their technical work reached a new level, but so did the strength and clarity of their ideas.

The tailoring was sharp, not affected; the clingy mohair dresses were sexy, but not skimpy. The sculpted pieces were extravagant, but not extreme, like a parachute silk dress with a gathered yolk across the back, puffed up so perfectly that it looked like a wind machine was blowing under it. It was restrained, and wearable, but also layered with references to an imperfect American life: like the wooden-beaded sash draped around a waist, reminiscent of a cheap seat cover. A collaboration with lumpy-bumpy Uggs could have been a throwaway money opp: instead, they created textured, sumptuous shearling-lined clogs that had editors pointing and whispering, “I want those,” across the aisle.

“Sportswear” is a loaded concept. It may be America’s greatest contribution to the fashion canon, but the casualisation of culture beyond the US means that it no longer belongs to us. Couture houses sell sneakers. And yet, the American experience remains singular and ripe for exploration through fashion.

Backstage, Eckhaus and Latta spoke openly about broadening their scope, but they also remain sensitive to what made people take a second look in the first place. The “grit,” as Latta called it. This was a breakthrough collection for them. Here’s to hoping it’s only the beginning.