MILAN, Italy — In times of rising gender fluidity, the power of sexual ambiguity remains strong. This is particularly evident these days in Milan. We’re seeing a resurgence of formality on the runways, but it’s not about reverting to a previous ideal. What makes today’s quest for elegance so engaging is precisely the fact that it is ambiguous. Slightly and subtly so. Forget Ziggy Stardust and glam rockers; think gents suited in lustrous, silky, slightly kinky or decedent tailoring.

At No. 21, Alessandro Dell’Acqua keeps expanding the vocabulary of the brand to depict a more nuanced picture of the contemporary man according to his own vision. No. 21’s success might have been kickstarted by some seriously reimagined easy staples, from the jumper to the parka, but Dell’Acqua shows no intention of resting on his laurels because he’s had commercial success. “It is our duty as designers to propose something new to the market, and not just follow the current needs of the market,” he said backstage. Apropos, the collection was mostly about suits, coats and tailoring: lean, but not skinny, predominantly black and largely executed with the kind of silky fabrics reserved for couture — hence the sense of gender ambiguity. There were sailor nods here and there, while the patent leather trousers made for a palpable sex club undercurrent, so it came to no surprise that Dell’Acqua was inspired by the ambiguous sense of camaraderie channelled by Rainer Fassbinder’s “Querelle.” The collection also channelled a good deal of dry, 90s sensuality à la Helmut Lang — a Dell’Acqua favourite — which felt relevant, and timely. 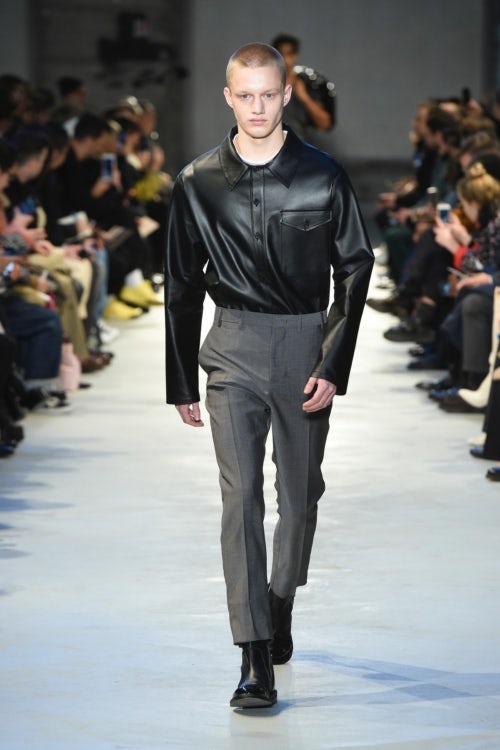 Over at Pal Zileri, creative director Rocco Iannone produced his best collection for the brand since his appointment one year ago. The balance of Iannone’s proclivity for opulent, baroque fabrications and his equally firm will to produce clothing meant for life, not just for the catwalk — after all, Pal Zileri has evolved a lot, but is no experimental brand — made for some interesting pieces, at once flamboyant and sharp. Again, a merging of couture fabrics and tailoring, which meant a face-off between the masculine and the feminine, was the main topic, but Iannone was a lot more extreme in his approach than Dell’Acqua. Despite having honed his skills at Armani, where neutrals are mandatory, Iannone is a colourist. He mixes painterly hues and rich textures with bravado, and the amalgamation of oily yellows, browns, burgundies and greys was outstanding. There were also women’s pieces that fit the show’s narrative but ultimately functioned as mere eye candy. Most of all, there was a southern Italian cockiness to the whole that had appeal and substance. The path is set, and the Scott Crolla memories are a good reference.

After the co-ed Linate extravaganza of last September, Giorgio Armani brought Emporio Armani back to the Milan men’s calendar. The move put the collection back in focus, making for one of the best Emporio outings of recent years. The collection revolved around a merging of sporty, outdoorsy functionality — of the mountaineering variety — and metropolitan speed. Backstage, Mr Armani expressed his intentions: suggesting something a bit less techno, a lot more natural. Armani is at his best when he goes natural, and the offerings benefited from it: gone are the neoprenes and shiny synthetics; everything, even fake furs, had a tactile, welcoming quality. The shapes were fluid and roomy, quintessentially Armani, as was the neutral palette of black and greys that gradually left way to frosted or creamy shades of white. It made for a clean, pure, authentic expression of Emporio Armani. Yet the show could have used a tighter edit. The show was incredibly long. But clearly, Mr Armani was proud of it, and he should be.

In Milan, the Streetwear Bubble Has Officially Burst

At Pitti, Proof That Real Fashion Revolution Starts with Product