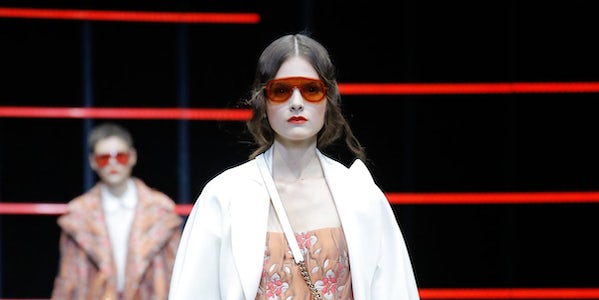 MILAN, Italy — Giorgio Armani likes to give titles to his collections. For his latest Emporio Armani show, he borrowed a catchphrase from hip-hop speech: freestyle. In the designer’s hands, it meant a lack of respect for the traditional rules of combining pieces, patterns and styles. The result was all very spontaneous — haphazard or random, even — but in a good way.

There was a good energy to the whole effort: to the pairing of skimpy jackets and fluid trousers, to the mix of checks and slightly exotic motifs, to the big coats thrown over shorts, to the proliferation of handwritten or old style Emporio logos. The colour palette — shades of red from crimson to orange, and black and white — kept things tightly focused.

After all, Armani has such a precise vision that he manages to keep things under control even when embracing the randomness of contemporary style. As usual, the show was long but enjoyable. What would make the designer’s experiments in fresher Armani-ism more impactful would be a new approach to casting. No, I am not suggesting he use the ugly-beautiful approach so popular elsewhere, but just something a little less institutional. Freestyle is fresh, and the mannequins Armani favors look like beauties of the past. Beauty that’s closer to today’s reality would make his message more impactful.