LONDON, United Kingdom — With 2018 coming to a close, retailers are saying goodbye to a relatively good year for the industry. Upbeat consumers, coupled with the long-awaited payoff from some slow-burn investments in e-commerce and supply-chain capabilities, finally helped them demonstrate they aren’t doomed. So what will shape retailers’ fates in 2019? Here are four focus points to keep an eye on:

TARIFFS: The industry may have felt some small measure of relief when it learned there would be a temporary reprieve on tariffs that had initially been set to rise from 10 percent to 25 percent in January. But the uncertainty surrounding U.S.-China trade relations is still poised to be a big distraction for retail in 2019. And investors will be judging these companies by their ability to cope. Retailers already are trying to tamp down concern on Wall Street about how they’ll fare in an escalating trade war. Under Armour Inc., for example, showed this data about its sourcing at a presentation this month, stressing that some of the China-made product isn’t even intended for the U.S. market. 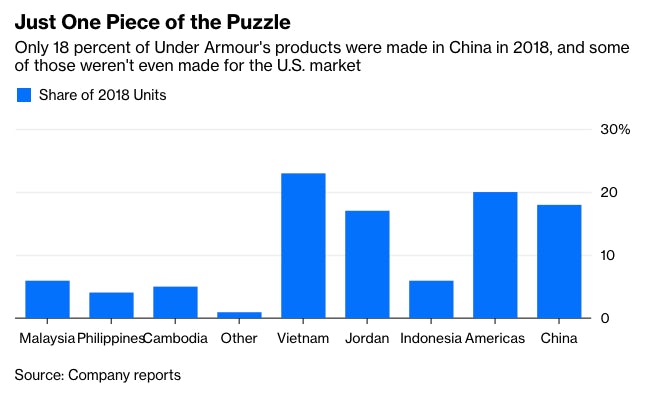 It stands to reason that the retailers in the best position to weather trade tensions and tariffs are the Goliath-sized ones. They have more power in renegotiating factory contracts and to push the costs down to their vendors. But serious pain could be in store for small- and medium-size retailers who try to protect their profit margins. And trouble at that stratum of the industry could end up driving sales for the big players that can maintain their low prices.

INVENTORY: Look for inventory management to be a key determinant of who ends up in the 2019 retail winner’s circle. Lowe’s Cos., for example, is staking much of its revitalisation effort on making sure its stores aren’t out of stock on key items. Kohl’s Corp. saw its shares rewarded this year as it managed to slash inventory thanks to initiatives such as rolling out smaller store formats and being more mindful about the products that go in a given location to ensure that the right items are in front of the right audiences. Inventory management has gotten much more complex of late, thanks to ship-from-store and click-and-collect programs, as well as revamped design calendars that aim to accommodate fast-moving fashion trends. The retailers who demonstrate they have a grip on this will likely see their shares rewarded in 2019.

SEARS: Eddie Lampert’s 11th-hour preservation efforts notwithstanding, it seems all but certain that the Sears and Kmart chains will be forced to liquidate in 2019 after their corporate parent filed for bankruptcy in October. Though Sears has been shrinking for years, don’t underestimate the shock waves that will ripple through the industry when it finally falls. Tens of millions of square feet of real estate will be dumped on the market and landlords will be desperate to fill them. And certain retailers might find themselves propped up by their rival’s demise, as was the case in 2018 when Toys “R” Us and Bon-Ton Stores Inc. liquidated. 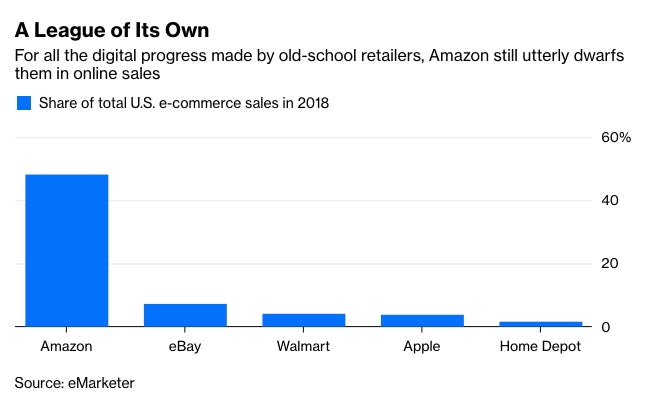 However, we’ve reach a pivotal moment in which traditional retailers are finally eliminating or diminishing key competitive advantages Amazon.com Inc. has long held. Chains such as Target Corp. are offering free two-day shipping on many purchases, and Walmart Inc.’s redesigned website is a breeze to use. Macy’s Inc. has noticeably expanded its selection online, more than doubling its assortment in that channel since April. Don’t look now, though: Just as conventional retailers manage to rival Amazon on these longstanding battlegrounds, new fronts are opening up. Amazon is gunning for the likes of Hennes & Mauritz AB with its private-label apparel, and it’s showing intensifying interest in physical retail with its cashierless Amazon Go stores and its Amazon 4-Star Store. The retailers that score with shoppers and investors in 2019 will be the ones that offer appealing alternatives to Amazon.

Next year will be a choppier, more challenging year for retail than 2018 was. These four factors and how retailers respond to them may help separate the winners from the losers.