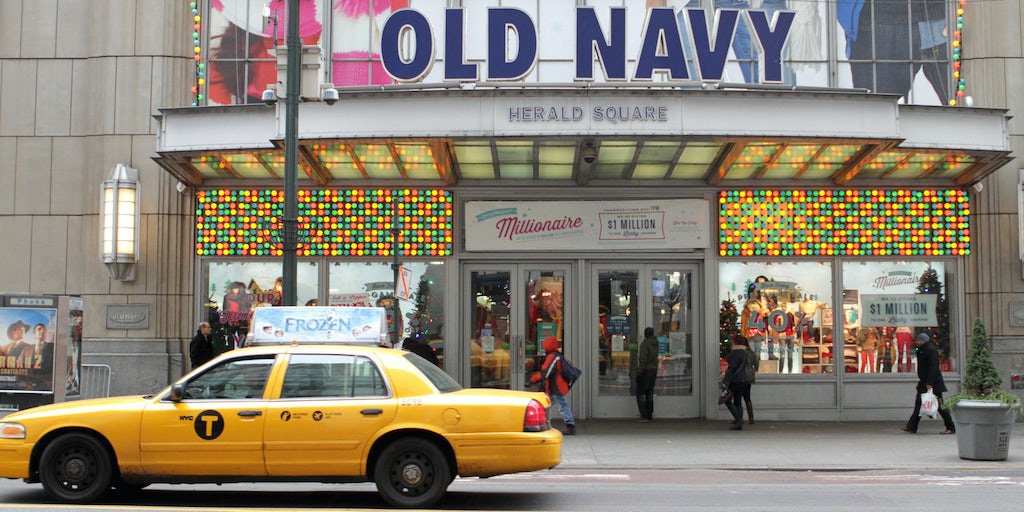 The split almost divides the company roughly in half: Old Navy generated $7.9 billion in revenues in 2018, while the remaining brands — Gap, Banana Republic, Athleta, Intermix and Hill City — combined for $8.7 billion.

Analysts said the move was a long overdue. Gap became ubiquitous in malls worldwide in the 1990s, with its globally recognised brand known for denim and American basic casual wear. But Old Navy, which launched in 1994, steadily cannibalised Gap’s customer base, selling products of similar quality at a lower price.

Old Navy outpaced Gap in revenue in 2006 with $6.8 billion in annual sales and the company has grown increasingly reliant on the brand to drive growth. The Gap brand has shrunk from $7.2 billion in 2004 to $5.3 billion in 2017, when Gap Inc. presented a strategy to shareholders that pinned its future on Old Navy and Athleta. It said it expected those brands to reach $10 billion and $1 billion in annual sales in the next several years.

“It makes sense simply because Old Navy was always running the business,” said Jane Hali, chief executive of research firm Jane Hali & Associates. “They were forced to do more with Old Navy because the rest of the company struggled, and now that they’ve split, there are two separate financial profiles so they can put more into each new [entity].”

The company’s shares soared 25 percent in after-hours trading following the separation announcement, after closing at $25.40.

Old Navy will be spun out into a new entity via a transaction that it said will be tax-free to Gap Inc’s shareholders. The rest of the brands underneath the former Gap Inc umbrella will become a yet-to-be named company.

Gap said Wednesday that its reasons for separating the company include sharpening its strategic focus and allowing the two entities to “capitalize on unique business models, growth plans and customer bases.” Peck told analysts in a call that over time, customers for Old Navy have diverged from the rest of its specialty brands.

“That divergence to me is now clear. And we think the best way for each company to grow and meet the evolving needs of our customers is to allow them to pursue tailored strategies separately,” he said.

The separation would also create more value for Old Navy investors, according to B.Riley analyst Susan Anderson. “When you look at the sum of the parts, maybe you’re not getting the full value of a [potential Old Navy] stock when Gap is hiding under its performance,” she said.

Gap launched Old Navy under then-CEO Mickey Drexler as a low-price, off-the-mall alternative to Gap, with stores designed to feel like warehouses. The brand was a near-instant hit, reaching $1 billion in sales four years later, and unlike Gap, kept growing as fast fashion chains H&M and Zara poached customers from Gap, which lost and never regained its aesthetic vision in the 2000s.

Gap Inc also posted its fourth-quarter earnings Thursday, posting sales decrease of 7 percent compared to the same period last year. Overall, its comparable sales fell one percent while Old Navy saw a 5 percent increase. As part of the reorganisation, 230 Gap stores will close over the next two years, which will erase $625 million in sales.

Though analysts cheered the split’s impact on Old Navy, many were skeptical it would solve the Gap brand’s mounting problems.

“Quarter after quarter Art Peck apologises for the fact that they didn’t … get the product assortment right,” Hali said. “But when is this actually going to change?”

Hali pointed to the respective Gap Inc. companies’ omnichannel capabilities, noting that only Old Navy has a buy-online, pick-up-in-store feature — something that Gap could’ve adopted while Old Navy was still a part of the main company.

“What concerns me is that they blame Old Navy’s customer for diverging from the other brands but really what every customer wants is a good product,” she added.