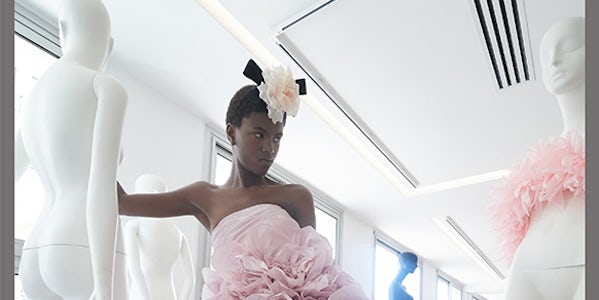 PARIS, France — Giambattista Valli is a man of extremes. “Having collaborated with H&M on a collection that will bring my vocabulary to a wider public, I thought it was time to push the pedal even more on the dreaminess and craft of haute couture,” he said, meandering through the grand and very posh salons of the Shangri-La hotel. This season marks a first for Valli, as the designer staged a self-curated exhibition in lieu of a traditional couture show. The format means the clothes were presented on mannequins, drawing a dreamy path across three rooms, allowing viewers to savour every little detail. “I wanted everyone to get as close as possible, in order to appreciate all the manual work that goes into turning a piece of fabric into the volumes I like so much,” he added.

Editing his own work for the exhibition was an effective exercise for Valli that made for a focused line-up of pieces that reaffirmed the unique DNA of his maison: a constant face-off between the unremitting precision of pure lines and the frivolity of flowery frills. His proclivity for extremes again came in handy, as Valli either works in subtraction or addition. There were the oft-copied, humongous tulle concoctions as well as the purest tunics, all beautifully exposed, highlighting the designer’s attachment to the grandest tradition of couture (Capucci, Balenciaga, Saint Laurent) and his fierce drive in making it modern. It worked.