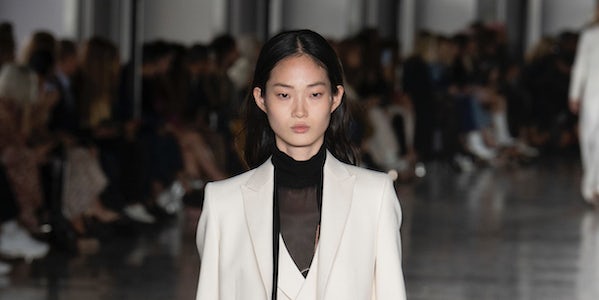 PARIS, France — Giambattista Valli spoke about creating harmony from conflict today backstage before his show. That’s always been his signature: an integration of sharp and fluttery, rigorous and frivolous. This season, Valli united whitewashed minimalism — the Valli version, of course — with India-hued psychedelia of the Sixties/Seventies variety. He chose Yoko Ono, one of the most polarising icons of our times, to embody his message: a free spirit with a deep soul, as stated clearly on his mood board.

Everything about the collection spoke to effortless encounters between seemingly irreconcilable worlds: the corporate and slightly 70s venue with rustic carpeting, as well as clothing that went from sharp mannish tailoring in cream — think John and Yoko sharing Tommy Nutter wardrobes — to billowy dresses with trains to intensely embroidered denim ensembles.

The action moved from white to intricate prints, and back. Indeed, it felt like a trip. This was Valli doing Valli, with the freshness that’s been defining his work of late. This is not a collection to challenge Valli’s world apart but one that consolidates it. What’s refreshing about the designer is his contentedness with making clothes that make women feel happy and beautiful. As simple as that. But that’s already a lot.