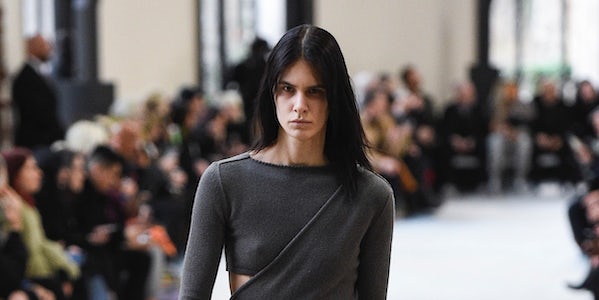 PARIS, France — When he was growing up in Porterville, California, Rick Owens was enchanted by Gary Numan’s “Down in the Park”. Its cold, hard glam struck a chord with a self-described “small-town sissy”. So imagine what it felt like for a fanboy to be in a position 40 years later when he could call his teen idol and ask him to supply the original tracks for one of those stentorian remixes that amp up the epic in an Owens spectacular. Luckily — for Rick and for us — Gary said yes.

It’s revelations like that which loan Owens’s signature stürm und drang an autobiographical intimacy. Only know that the enormous drama that is played out on his catwalk season after season springs from some private obsession. “It’s a simple recipe,” said Owens on Thursday. “Everything is a silent, black and white, Bible epic.” The kind he watched in his basement in Porterville. With a side-order of Italian futurism and a soundtrack by Gary Numan.

But there was something else in this new collection, an extravagance, a feel for performance, clothes that claimed space, with shoulders to the sky. A gigantic glamour. Leopard-printed satins. Sweeping latex coats, thigh-high boots, and gauntlets. Moncler duvets mutated into art deco capes. And swathes of cashmere knit, spun into gowns that were slit to the waist on one side and trailed away into a serpentine train on the other, or traced with glittering graphic lines like the iconic jumpsuit Kansai Yamamoto designed for David Bowie’s Aladdin Sane tour in 1973.

We were chatting about Gary Numan. “I romanticise doom,” said Owens. “That’s very much about Gary.” (“A clinical and calculated artifice that gazed dispassionately on the banality of a decaying world,” was Rick’s paean to Numan in his show notes.) Half an hour later, the singer was chanting on the soundtrack, in his signature affectless monotone, “We are not lovers, we are not RO-MAN-TICKS.” Maybe that would have worked better for an Owens show a few years ago, but he’s a different person now. A lover, maybe even a ro-man-tick. “I’m at a point where I make more of an effort when I go out, where I can play more,” he said. “Communication and play…the most profound reasons we’re on earth. And that’s what fashion is about.”

So the darkness draws in, and Rick turns on the floodlights. No dispassionate gaze. More an engagement, glamour as a cudgel for the bigots. And nothing clinical or calculated, just plain old realism. There’s a virus on the loose (and hand sanitisers on the seats) but Owens wasn’t bothered. “I’m lucky I got this far,” he said. “I’m always conscious this rests on the most fragile of threads, on the aesthetic whims of people like me.”