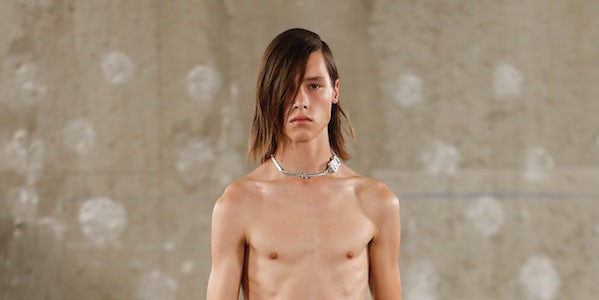 PARIS, France — Alyx, the brainchild of Matthew Williams, has been weirdly rechristened 1017 ALYX 9SM. It also had its first show, held in the cavernous belly of an abandoned building in the Bercy area of Paris. With its throbbing music and heavy underground club feel, it came with the gritty tone and rather dark, dystopian layer that’s usually associated with alternative urban fashions.

This deja-vu feel was actually quite deceitful. The power of this truly progressive label is in fact elsewhere: it’s the hi-tech fabrics and challenging constructions (laser-cut, bonding, garment dyeing) that make Alyx unique. The cold, industrial feel of the garments is the direct result of the lab-like process that brings them to life. Performance and aesthetic become one, as form follows function in unexpected ways.

Refreshingly straightforward, Matthew Williams describes Alyx as “clothes inspired by clothes and by the way clothes are made.” Yet clothes are also tools to build an image, and the fresher the image is, the better the message comes across. In the future, Williams should try to match the technical innovations he stands for with equally new looks. This one felt old – we’ve been there too many times – and it was a pity.