Follow in the path of fashion insiders: apply for your next job on BoF Careers now.

LONDON, United Kingdom — Campbell Carey began his tailoring career at the Scottish College of Textiles, studying textile and fashion design management. “Not really knowing what I wanted to get into,” he gained work experience at Savile Row’s Kilgour before securing full-time employment at the bespoke tailor as an apprentice, eventually becoming director after 11 years.

Carey left Kilgour after it changed hands in 2009. He jointly acquired Mount Street tailor Hayward, but the brand permanently closed in 2013 following “the wrong investment, wrong type of investor [and the] wrong climate.” Carey returned to Kilgour for 18 months before he was approached by Huntsman, the “jewel in the crown” of Savile Row that has dressed royalty, politicians, fashion designers and Hollywood actors, including Queen Victoria, Winston Churchill, Hubert de Givenchy and David Bowie. 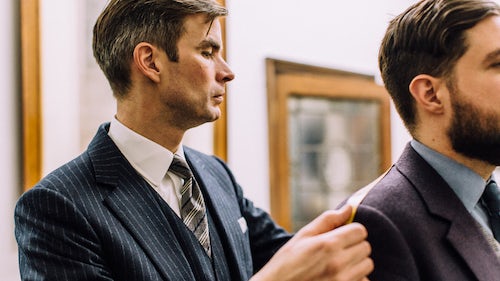 With Carey as Huntsman’s head cutter and creative director, the brand has launched ready-to-wear alongside its bespoke tailoring service, debuting at London Fashion Week Men’s for Autumn/Winter 2020. This year will also see their third collaboration with the Kingsman film franchise, working with costume designer Michele Clapton to dress the likes of Ralph Fiennes, Stanley Tucci and Aaron Taylor-Johnson from the Huntsman patterns of the First World War era.

BoF met with Carey at No.11 Savile Row, where Huntsman will debut their ready-to-wear collection in partnership with the BFC, to discuss his role as a “creative custodian,” the evolution of Savile Row and how to navigate the “egos of this street.”

What drew you to a career in fashion?

While I was at the Scottish College of Textiles, I spent the first couple of years not really knowing what I wanted to get into. I studied a bit of weaving for two years and then knuckled down to create a collection in my third and fourth year. It was then I thought menswear was the way to go because it seemed more practical and easier to get into.

In my second and final year, I was sponsored by Holland & Sherry, which had the same owner as Kilgour. After college, I started as an apprentice at Kilgour and everything I’d learned at college was put on the back burner. I was there for 11 years, working my way up to become the director. In 2009, when it changed hands, [my boss] and I jumped ship and with backing, we acquired Hayward on Mount Street.

It was a good learning curve because it was the wrong investment, wrong type of investor, wrong climate. Mount Street nowadays is no place for a small business like that. It’s the likes of Céline and Ralph Lauren. You have to have big money behind you to be able to survive. I went back to Kilgour for 18 months, but it was a lifelong dream to work at Huntsman — it’s really the jewel in the crown. I was approached by a peer to work here as creative director and head cutter, shared with their then senior cutter Dario [Carnera], and everything I’d learned 20 years ago at college came back. This really is home.

What was the biggest lesson you learnt when starting out?

Mistakes aren’t necessarily a bad thing. You’ve got to launch in and make mistakes to be able to learn. It’s like [training to be] a surgeon or a sushi chef — you’re sitting watching someone do the same thing over and over again for two, three years minimum. Then, you’re let loose and [it’s] panic, panic, panic. The first fitting I cut was a disaster, but I held my hands up and we got somebody more senior in and he talked me through it.

This is a small street [and] it’s pretty incestuous. You’ve got to keep your slate clean because the slightest bit of bad reputation will haunt you for life.

Reputation is also the be all and end all. This is a small street [and] it’s pretty incestuous. You’ve got to keep your slate clean, because the slightest bit of bad reputation will haunt you for life. It’s about having the customer base behind you so when you come to move, you can guarantee the business you bring with you.

A lot of the clients I’ve had for 20 years will follow you like a hairdresser. Yes, it’s important where the garments are made and which label you’re working under, but it’s you they are following.

What’s the best way to stand out in an apprenticeship?

Hard work. I think it’s important for students coming out of college these days to be prepared to do anything, within reason. Knuckle down and make yourself indispensable. Get in there and impress the right people. Be prepared for a lot of hard graft. As cutters, you never stop learning and if you start saying you’re fully established and fully trained, you’re kidding yourself.

You have to drop your ego. Don’t forget you’ve got a team behind you who make your garments and will work through the night for you. In this industry, you have to be able to speak the language of the guys who will dig you out of the shit when it comes to it. You can put across the image of Huntsman and Savile Row in front of the clients, but you still have to go downstairs and talk the language of your coat makers and tailors.

How has Savile Row changed since you started working here?

Twenty years ago, you had tailors on the street with curtains in the window so you couldn’t see into the shop, which is bonkers if you think about it. How the hell did they survive? Huntsman had that exterior too. When I was an apprentice, I would never come through the door. I spoke to someone at the top of the stairs of the basement.

Now, [we’re] creating a ladder system so that a young client can work his way up from our ready-to-wear, which is manufactured in Portugal but still cut from our bespoke block with the Huntsman silhouette, to the bespoke top rung. So, no matter what age group, wealth bracket or nationality, we’re making Huntsman more accessible.

How has employment in tailoring changed over your career?

Since I started, I would say more females [work in tailoring] first and foremost, but [there are] also younger people coming into the trade. All the tailors between the late 70s to early 90s were greedy with their resources and didn’t think about the next generation. I was so lucky to get an apprenticeship at Kilgour — it was like gold dust back then. Now, I think it’s a bit more accessible but it’s still bloody hard.

We get people coming through the door daily with their CVs, who have done some sort of tailoring course and they’re keen to get home. But you’ve got to be focused, determined and willing to start at the bottom. You need the passion — it’s the want to learn part. It’s crazy when somebody comes in the door and they’ve got a great opportunity, but they just stand still. [Once] you’re in the door, there’s still a long path ahead.

You have to be able to speak the language of the guys who will dig you out of the shit.

Internships are how I got where I got. I interned for free; I worked for £2.50 an hour over one summer — it was mind-numbing work, but it taught me loads. Don’t do four years [at college], get to the end and go, “yep, I’m here.” You’ve got to get out, even as early as first year. Start thinking about what career path you want to get onto. There are so many different avenues, so you’ve got to be focused early on.

What are the most rewarding aspects of your role today?

Having a hand in something from a bunch of measurements to a walking, living garment on someone’s back, as well as being the head of a team of people who help make that finished garment. It’s stressful but we’re flying all over the world to fit VIP clients that must have that garment and it’s incredibly rewarding.

We start from scratch with all the fittings and you see customers get passionate about something you’ve designed, with cloths that are specific to the East Coast of America or Asia, in terms of colour palette, cloth weight, look — it’s so rewarding when you hit the nail on the head.

But you can’t cut corners in anything you do here, otherwise there’s no point. It’s learning to not get stressed about things. I prefer to call myself a creative custodian than a creative director because once you take a business down a certain path that doesn’t work, it’s very difficult to dig it out of that experience.

What do you think is essential for working in this industry?

A good work ethic, determination and a good eye. You see a man in a suit and think, “I could change that, do that” — you’re constantly striving to do something better. Even with suits that walk in the door here, you’re thinking, “I could try that next time.” It’s always evolving.

There’s a lot of egos on this street, a lot of peacocks, who will cut something one dimensional and it’s their way or the highway. Too many people in this trade think they’re on the same level as the clients. You have to realise you’re not and gently guide them in the right direction. You’ve got to be prepared to get out of your comfort zone, even if you don’t think it’s right. The customer is not always right but they’re always the customer.