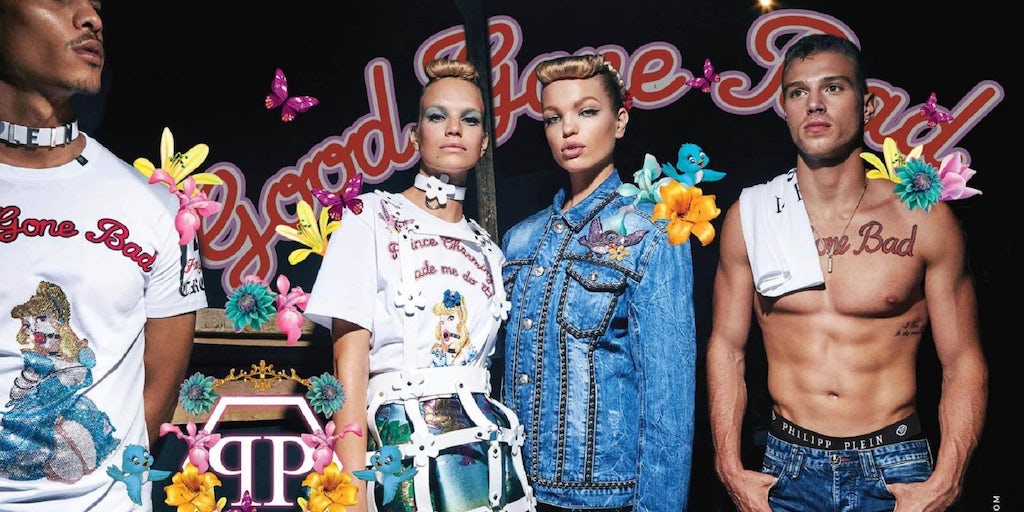 MUNICH, Germany — On the terrace of Philipp Plein’s marble-clad aerie overlooking Cannes, a line of women snakes past the swimming pool showing off the German designer’s 2019 cruise collection of crystal-studded bikinis, thigh-high stilettos and leopard-print ballgowns. Next comes a parade of men in dollar-bill-printed button-ups and blue python jackets winding around a fountain filled with bottles of Plein-logo Champagne and a fire-engine-red statue of a gorilla. Mirrored lettering on the wall welcomes visitors to “the Jungle of the King.”

As master of a realm that’s a world apart from established fashion royalty, Plein leaves little doubt as to who he thinks is king. The iconoclastic entrepreneur has made tacky taste big business, barnstorming the fashion world with blazing spectacles featuring tuxedoed models on jetskis or a burlesque dancer writhing in a giant martini glass.

While luxury brands such as Hermes or Louis Vuitton have spent more than a century honing their soft-leather-lined reputations, in the nine years since Plein opened his first boutique he has attracted a devoted following for his $600 sneakers and $1,000 hoodies—and even a $100,000 crocodile trenchcoat—a price that would make even devotees of Balenciaga or Louis Vuitton blanch.

“Philipp Plein is a brand that’s very polarizing—you either hate it or you love it,” the Munich-born designer says at a long marble table on his terrace, where his handlers sip Coke Zero and the rapper Tyga has been summoned for a lunch of grilled chicken and cherry tomatoes.

Plein is targeting rapid expansion as other independent luxury houses have found it harder to grow in the shadow of LVMH and Kering. He aims to open two stores a month and build up secondary brands such as Plein Sport, Plein Kids, and Billionaire, a line for older men that he took over two years ago.

He calls himself an underdog, but Plein has bulldozed his way into the industry with help from the establishment. Carine Roitfeld, a longtime Tom Ford collaborator and former editor-in-chief Vogue Paris, consults for the brand, and was busy backstage making last-minute adjustments before the show in Cannes. His public relations are handled by Karla Otto, whose army of guest-list approvers and quote-checkers are charged with shaping the image of prestigious brands such as LVMH’s Givenchy, Berluti, and Rimowa.

Yet some in the fashion set are tiring of his over-the-top antics. While last year’s resort collection turned out stars such as Paris Hilton and Eva Longoria, VIP attendance was sparse this time around, and a Vogue critic called recent collections “icky” and “tired.”

And with the #MeToo movement exposing allegations of sexual abuse by top photographers and heightening the industry’s sensitivity to gender issues, the raunch factor in Plein’s advertisements and shows risks becoming a liability. His “retrograde” image feels out of touch with the times, says Elodie Nowinski, professor of fashion studies at EM Lyon Business School.

Plein’s “portrayal of women is so clearly oversexualized and blatantly shows them in a submissive role,” Nowinski says. “All the imagery is focused on the commodification of women’s bodies within the male gaze.”

Plein’s fast-cars-and-chrome image might seem anathema to the stalwarts of Paris’s Avenue Montaigne that have long posed as the gatekeepers of good taste, but he’s emblematic of luxury’s shift toward a pop-culture sensibility that fetishizes the new and flashy and downplays old-style craftsmanship. Even the most staid brands are pushing the envelope in a bid to hold the spotlight: Chanel erected a life-size rocket for one recent show, and Gucci models carried baby dragons and replicas of their own severed heads down a runway.

Established brands have similarly picked up on the notion of extending their designers’ aesthetic to every aspect of their image, from store renovations to social-media posts—a game Plein has been playing for years. His 1.1 million Instagram followers see him shuttling in a fleet of luxury cars from stores to showrooms to homes dripping with crystal chandeliers, walls and furniture plated with mirrors and covered in crocodile leather. It’s difficult to see where Philipp Plein, the person, stops and Philipp Plein, the brand, begins.

“We’re very authentic, whereas most brands have become impersonal,” he says. “We have real fans who love Philipp Plein. Someone invites them to a Hugo Boss show, they’ll say “Who’s Hugo? Who’s Boss?”

Plein has set himself apart from flash-in-the-pan fashion outsiders like Ed Hardy and Von Dutch by recruiting top-quality Italian suppliers and investing in his own boutiques. He says he’s always found ways to self-finance growth and avoid debt, calling his Swiss-based company “100 percent independent.” And Plein has been happy to share the risk when he can, for instance recruiting franchisees to run 70 of his 120 stores. Plein says sales approached $300 million last year, in the same ballpark as LVMH’s Kenzo or Kering’s Alexander McQueen, according to MainFirst Bank AG.

With ad campaigns that show models bloodied on the floor or splayed across the hood of a car, Plein might not seem like an obvious brand to associate with children. Yet in 2011 he introduced Plein Kids, and in June the children’s lineup got its first standalone store, in Amsterdam. The broader Plein image doesn’t deter clients like Ivana Ilic-Labia, a Russian TV journalist living in Monte Carlo who came to the Cannes show with her two daughters and her mother: three generations dressed head-to-toe in Philipp Plein, with the seven-year-old twins turned out in pink-and blue-leather bombers and carrying crystal-studded miniature pocketbooks.

“Even when she’s a little girl, a woman loves everything that sparkles,” says Ilic-Labia, huddling from the rain in the garage where Plein’s Instagram followers are accustomed to seeing him park his Bentley and his Rolls-Royce. “Philipp is the No. 1 in fashion, but he’s so down to Earth.”