PARIS, France — On the surface, Simon Porte Jacquemus, 28, and Marine Serre, 26, couldn’t be more different. Dig a little though and you’ll find some common threads, most obviously the fact that they’re leaders of the next generation of French fashion, and anointed as such by fashion awards like ANDAM, Hyeres and the LVMH Prize. Jacquemus won the LVMH Special Prize in 2015, Serre took home the whole kit and caboodle last year.

Something else they could be said to share is an understanding of the fact that, in fashion, everything old is new again. In Jacquemus’s case, that meant his love of the 1980s was refracted through his presentation. For Serre, the idea was more literal – and more necessary. Her design ethos thrives on an acute sensitivity to wastefulness.

Around half the 44 looks in her Spring Collection were sourced from what she calls “pre-existing product”, culminating in a spectacular handful of classic couture silhouettes created with upcycled old clothes. One dress was a feast of pockets from discarded army jackets, another was a fish-tailed fantasia of old rubber diving suits. Serre saved the best for last: a strapless goddess gown made from the kind of kitsch printed blankets you find at the back of dead stock shops. It was defiantly deluxe. 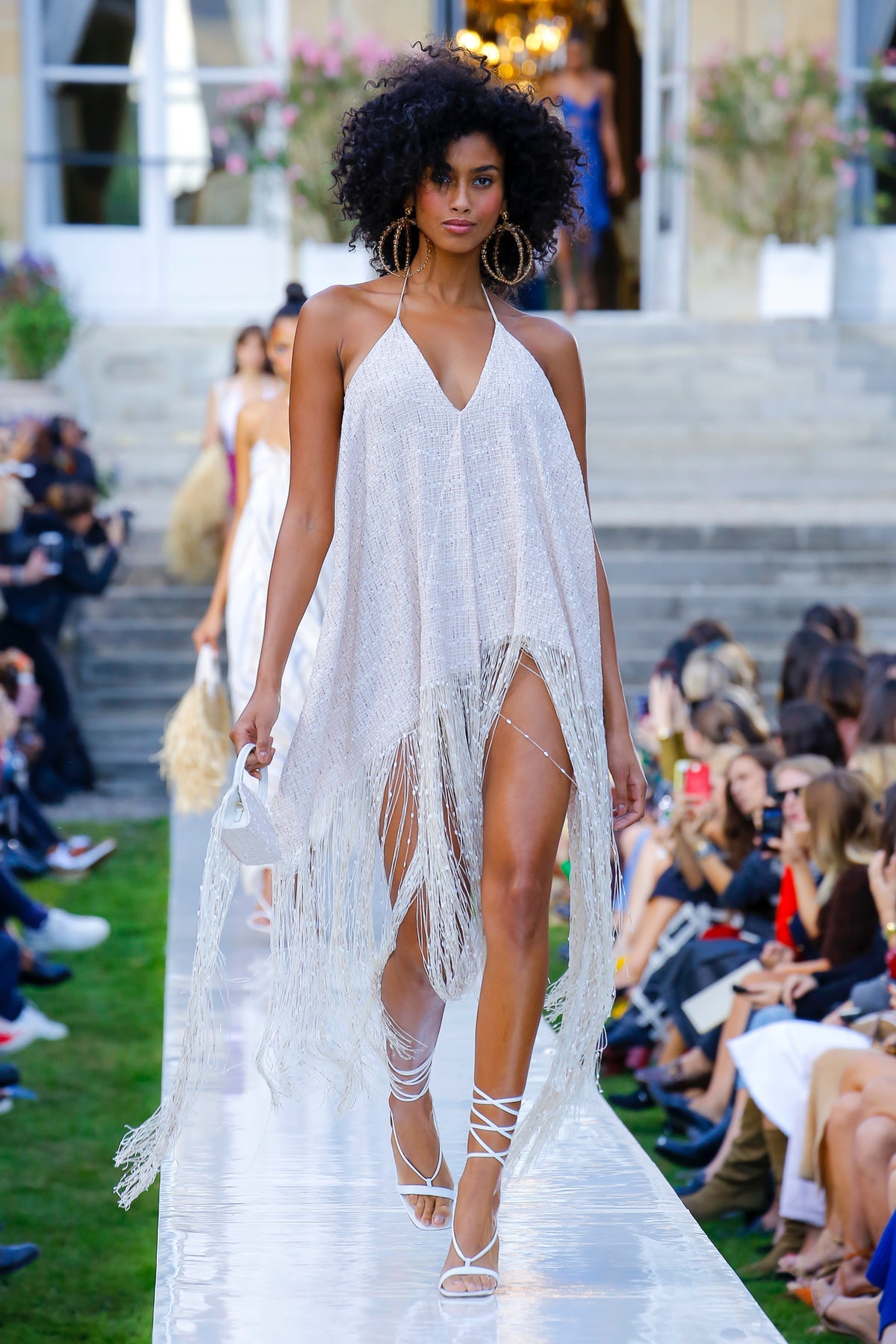 A not-quite-so-major point of contact between the two designers was that they both showed in gardens this week, making the most of a glorious Indian summer in Paris, and defying the elements that have been so viciously unkind to anyone else who decided to show outside this season.

Jacquemus’s venue was the glamorous backyard of the Italian Embassy, Serre’s was a small oasis of green in an immigrant neighbourhood bordered by railway tracks, far, far away from ambassadorial glitz. Her models walked on an elevated concrete walkway. Serre lives in the neighbourhood and had fantasised about using the walkway as a catwalk.

Jacquemus’s catwalk was also elevated, so much so that it generated some uncomfortable upskirt moments. He thought maybe that’s what fashion shows might have been like in the 1980s (his dream decade, remember?), just as the woman he conjured up was the the kind of party girl who’d be papped in Paris Match in the boom years before he was born. One good reason why he could say, “She was unapproachable to me.” And she remained so, high on her catwalk.

If his mother inspired the radiant sensuality of his spring collection a year ago, Jacquemus’s latest was much more boobs-out overt, plunging, clinging, sheer, slit to here. “This is not my mum,” he said. No kidding! You could imagine this woman leaving the beach in the briefest of bikinis, taking a scarf and a pair of vertiginous white sandals out of her GIGANTIC raffia bag, wrapping and strapping, and heading off to the Caves du Roy for fizz and disco. Jacquemus called his collection La Riviera.

About that bag and those shoes… he insisted they’re his true love. “It takes so long to develop clothes,” he moaned. “Accessories are much more spontaneous.” On the evidence of this outing, they’ve also evolved into a more fulfilling creative challenge than the clothes.

There was thought — and wit — in the design of the shoes, the scale of the bags. Smart too, to create such readily identifiable signatures. No wonder they’re proving so successful for him. And they’re all his. No collabs. Unlike the clothes, which were the fruit of a fourth collaboration with the Woolmark Company. 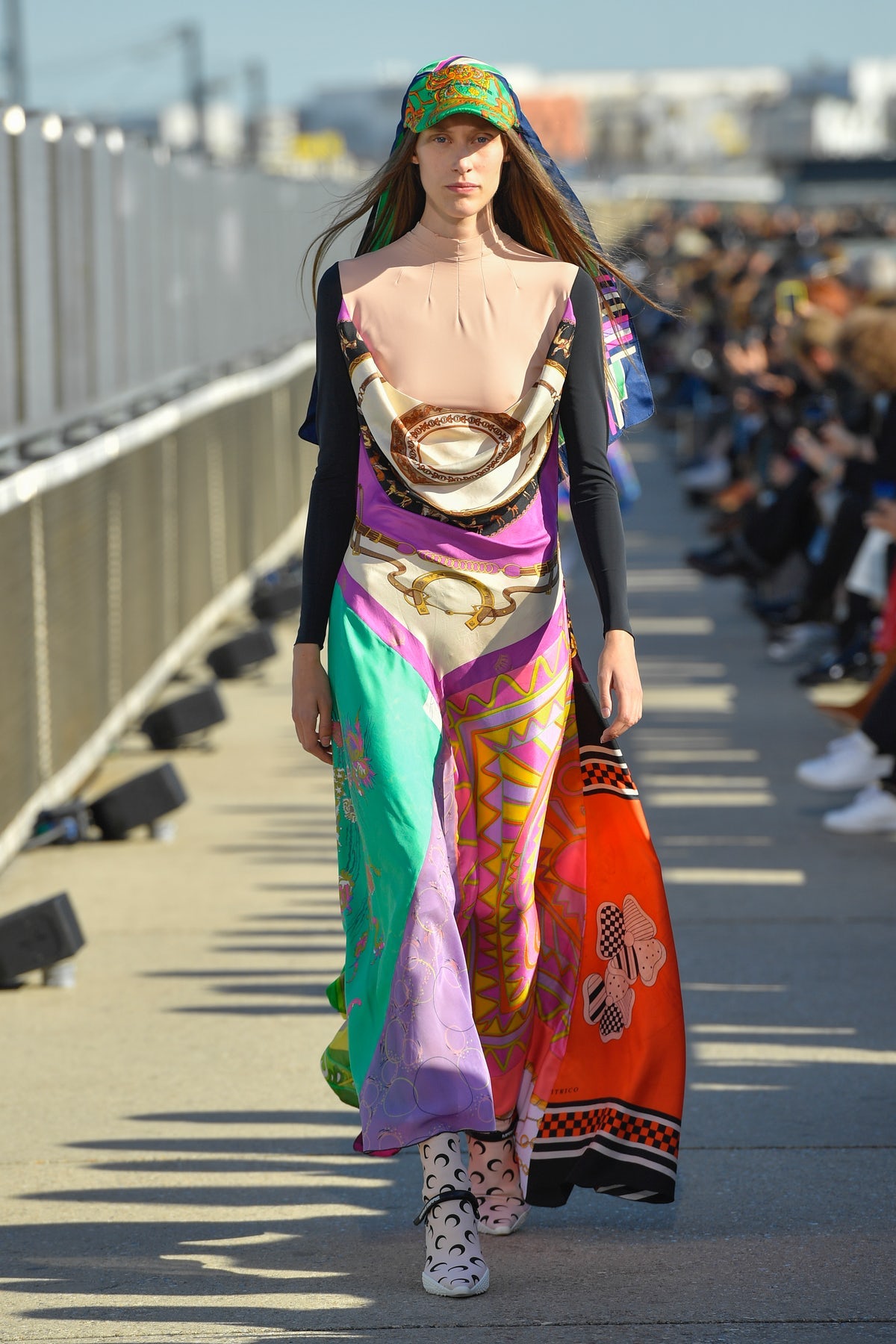 Marine Serre’s shoes were collaborations, with Melissa and Nike. But there was no way her clothes were accessories to the accessories. She grouped four lines – Gold, Green, White, Red – under the umbrella Hardcore Couture, the hardness referring both to the pressure she felt after her slambang runway debut last season and the increasing difficulty of maintaining a business fuelled by upcycling.

Speed is of the essence in fashion now, so Serre pushed it to the max: Formula One. Crazy branding – MARINE FUTUREWEAR – was all over her Gold line. But there was also acute tailoring, the combination of the two echoing her previous employer Balenciaga. Green was self-explanatory, a range of looks assembled from “pre-existing product”, those blankets once again the star, particularly in the menswear. White was sport, culminating in a couple of sensational coats. The one decorated with key fobs was worn by Cordula Reyer, a runway favourite of Helmut Lang’s in the 1990s. The Red range was (see above).

Reyer’s presence — and the presence of other familiar faces from runways long ago — highlighted another very human side of Serre’s fashion philosophy. She was wondering why things pass away, then come back, and that made her think about people too. It’s something that seems to be on the minds of other designers.

Shalom Harlow, Helena Christensen and Carolyn Murphy all made runway appearances in Milan. In a particularly rootless moment, we crave the authenticity of genuine personality, in a piece of clothing as much as a human being.

Jacquemus: Bigger Than You Think

The Boys of Jacquemus