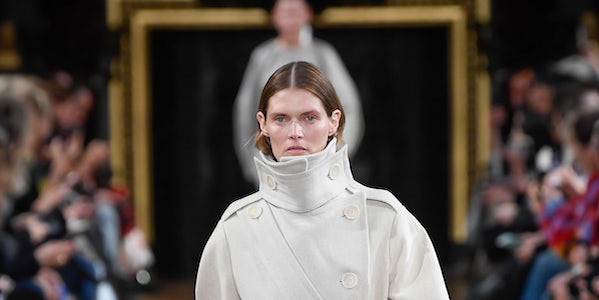 PARIS, France — When Stella McCartney was a wee slip of a thing, she met the illustrator Erté, by then a little old living legend. If the meeting was chance, he clearly made an impression, though it took decades to find expression in McCartney’s work. So here she was on Monday in her usual show venue, the gilded salons of the Opéra Garnier — an environment with which Erté himself would undoubtedly have been familiar — offering up a collection that filtered him in ways subtle and not so.

First, the not so. A collaboration with the Erté archives released never-before-used prints: jellyfish, starburst, a beautiful spiral pattern, picked put in beading on what would pass for eveningwear in McCartney’s pragmatic world. One look featured an intriguing echo of Karl Lagerfeld’s famous beaded shower head from one of his designs for Chloé (remembering how uncharitable he was when Stella got that job). Malgosia Bela wore Stella’s update, a floor-length, slightly sculpted t-shirt situation. She also opened the show in a sashed, funnel-necked officer’s coat that made me wonder if Stella had Erté’s White Russian origins on her mind. Same with the drop-waisted looks, like Paris in the 1920s. (That’s where the subtle Erté influence came in. Listen, if designers won’t tell me a story, I’ll make one up!)

Sashes, belts, flying straps were all over the show. They have been one of this season’s favourite follies. McCartney even managed a latticed overlay, though not for a minute did I imagine she was going S&M on us. It was all in the service of movement, the same principle which has made fringing a major trend.

Equally major this season has been leather. McCartney’s response was a showcase of vegan leather options. Not just shoes and bags but trench coats and opera coats and artfully perforated shifts and a head to toe sports look for the boys. (Sidebar: best men’s collection yet.) She listens to her customers. They want cruelty-free luxury. For autumn, she has given them an animal-free sheepskin that fulfils all tenets of fuzzy opulence.

McCartney’s ideal would be an item you never want to throw away. I believe “extended use” is the industry term. She’s closing in.