LOS ANGELES, United States — Like many influencers with tens of thousands of followers on Instagram, Janibell Rodriguez, a 23-year-old personal style blogger, typically charges brands to promote their clothes to her 37,700 Instagram followers. Fashion Nova, however, is an exception.

The brand first emailed her out of the blue last autumn offering to send her free clothes. She liked the pieces and began a relationship with the brand, regularly posting images of herself wearing their $30 matching top and skirt sets and $10 bodysuits, just a few of the hundreds of styles Fashion Nova releases every week.

“They have such a large following,” she said. “And if by the off chance they want to repost me, that’s a big deal for my brand.”

Fashion Nova has perfected the art of instant gratification for a very specific customer: young women, often minorities, who live on Instagram, know their angles and take their style cues from celebrities like the Kardashian Jenners rather than fashion magazines or designer runways. The five-year-old website mints tube dresses and streetwear looks by the thousands, many inspired by paparazzi shots and celebrities’ social media posts.

Once hooked, customers often become evangelists. The brand counts over 15 million followers across its Instagram accounts, and many users routinely tag their selfies with the hashtag #NovaBabes. The value of Fashion Nova’s social media exposure is more than that of H&M and Zara combined and second only to Nike in a ranking of non-luxury apparel brands compiled by Tribe Dynamics, a marketing technology firm. That’s driving a sharp uptick in sales at a time when fast fashion’s reigning giants, H&M and Inditex’s Zara, are seeing growth slow.

The brand is expanding into new product lines — NovaBeauty is slated to debut late this year or early next, and there are plans to open more stores over the next few years. A collaboration collection with recording artist Cardi B will drop in November.

“We are the fastest growing brand in the world,” said Richard Saghian, Fashion Nova’s chief executive. “We have no seasonality. Every month going forward was larger than the previous month due to our NovaBabes being so loyal.”

Saghian founded Fashion Nova in 2006 as a chain of stores selling low-price clubwear and apparel in Los Angeles-area malls. He launched the e-commerce site in 2013 and Instagram was central to the online business from the start. While Saghian says there are no structured rules to which influencers Fashion Nova forms relationships with, he said those partnerships can range from likes and comments to free clothes or financial compensation.

According to a source with knowledge of Fashion Nova’s early social media strategy who did not wish to be identified, Saghian pushed his team to encourage as many Instagram users as possible to post pictures of themselves wearing the brand, while also interacting with them through likes and comments. Whether those users had 1,000 followers or 10 million was secondary; the goal was saturation.

“They reach out to me frequently,” said Rodriguez. “It’s very casual, it’s like you’re talking to a friend.”

Fashion Nova closely monitored its followers and anyone using the #NovaBabe hashtag. Women with at least 1,000 followers — too few to get on the radar of most major clothing brands — would receive offers for free clothes in exchange for tagging the @FashionNova handle, according to the sources. Many were compensated only in clothes and exposure when their posts were shared by the brand’s main account. Influencers with over a million followers could command payment of around $10,000, more for top-tier celebrities like Kylie Jenner. Sales via influencers were tracked by individual codes.

The company has found that “micro-influencers” en masse are a bigger driver of sales than endorsements by Instagram’s biggest celebrities. When Jenner posted an image of herself wearing Fashion Nova stretchy jeans in December 2016, “we were already at a point where the increase in sales [she] brought were incremental,” said Saghian.

Today, around 2,000 influencers create roughly 6,000 pieces of content about the brand each month, according to Tribe Dynamics co-founder Conor Begley, making it one of the most talked about brands online despite being virtually unknown in some fashion circles. 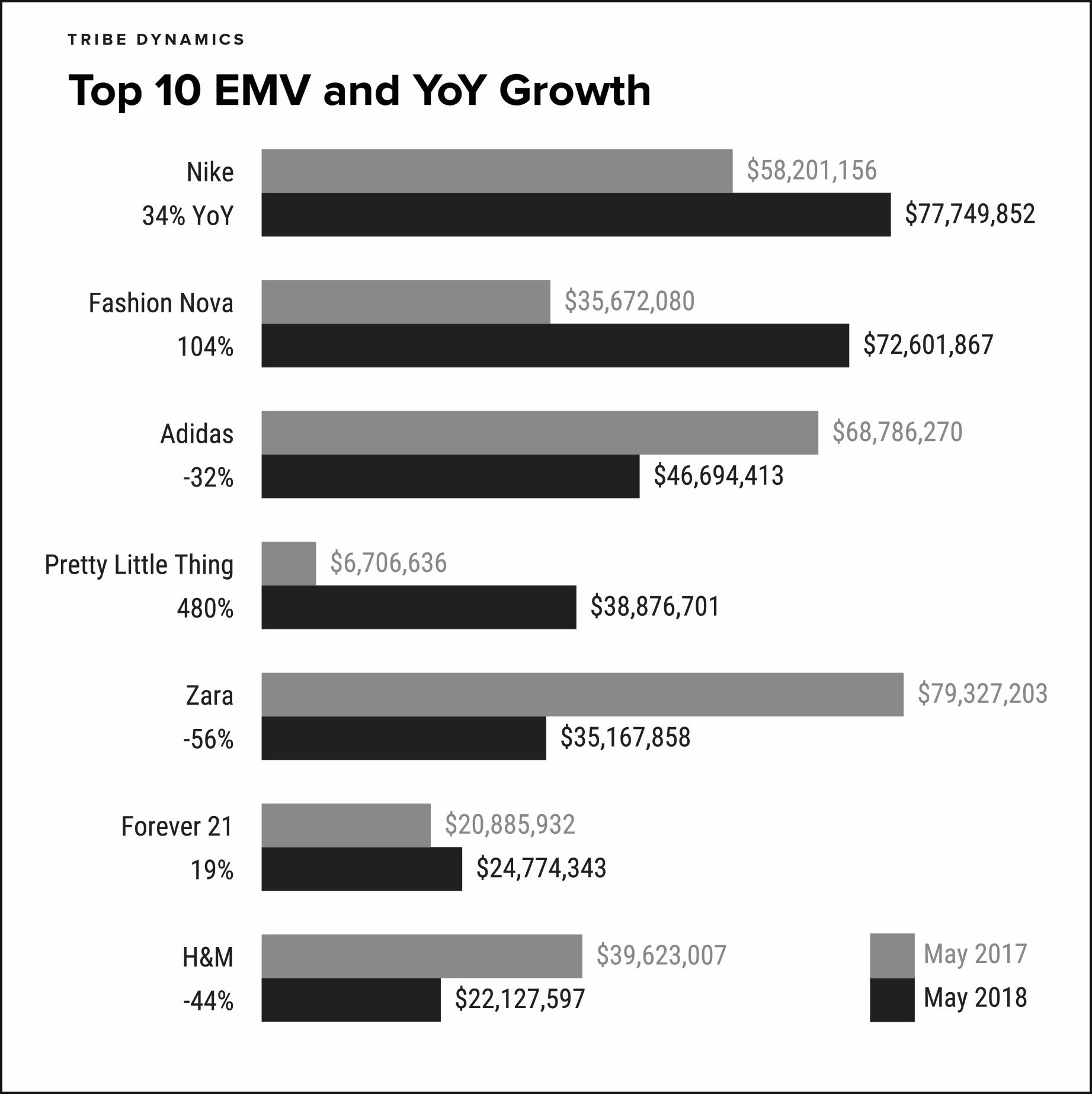 “They are treating the influencers as if they are PR outlets,” said Begley. “The volume of content created about Fashion Nova is out of control.”

Saghian applies the same saturation strategy to his merchandise. Fashion Nova works with about 1,000 different manufacturers to release 600 to 900 new styles per week, a pace Saghian said he wants to increase. Many items are made in Los Angeles, though the company also works with vendors in China.

The company also caters to a diverse range of body types and ethnicities, many of whom feel ignored by mall retailers that offer limited plus-size lines.

“Fashion Nova took basics styles like denim and a bodysuit and a top and [rebuilt] them to fit normal women,” said retail analyst Gabriella Santaniello. By contrast, Brandy Melville offers one size for most items, while Forever 21 only recently relaunched its plus-size collection in 2017 to include trendier options.

Saghian, who said he has no financial partners or outside investors, declined to disclose sales figures. Revenue is certainly a small fraction of H&M’s $26 billion or Inditex’s $29.5 billion last year. And those companies are investing heavily in e-commerce, including working with influencers.

The rapid growth hasn’t come without growing pains. In April, Fashion Nova agreed to settle a class-action lawsuit brought by three employees who claimed they were owed compensation for unpaid overtime, missed meal breaks and other labor violations. The company agreed to pay a $500,000 settlement to hourly employees who worked at the company between April 2013 and October 2017.

Last year, three female employees of Fashion Nova stores filed lawsuits alleging a male employee, a driver, had sexually harassed them and that they were fired after bringing the allegations to a manager. The company denied these allegations in court filings. The company settled one of the complaints, involving one woman, in June 2017.

Saghian said the driver was fired over two years ago. He said any company that is rapidly growing will have “bullshit lawsuits coming their way,” but that “we have vigorously defended these claims and take all employment issues seriously. Fashion Nova prides itself on its inclusive working environment and remains dedicated to transparency and diversity.”

Despite its success, Fashion Nova is riding some trends — including fashion’s streetwear obsession and the Kardashians’ overwhelming clout — that won’t last forever. And the market is getting increasingly competitive. Boohoo, a UK retailer targeting a similar customer, acquired NastyGal, Sophia Amoruso’s then-bankrupt brand, for $20 million in 2017 and a majority stake in PrettyLittleThing, a small but rapidly growing British retailer, for £3.3 million ($4.3 million) the same year. Boohoo group’s sales grew 97 percent to £579.8 million ($763 million) in the year ending in February.

But Fashion Nova is investing in infrastructure to keep up: in September, it will open a 400,000-square-foot automated distribution centre in Los Angeles. The company is exploring ways to expand and expedite its manufacturing network in Los Angeles, and is increasingly insisting on exclusive vendor relationships in order to fend off competitors, Saghian said.

He is also considering more traditional marketing strategies like television commercials and is planning to open his first brick-and-mortar stores since launching the online business at the Glendale Galleria in April 2019.

In November, Fashion Nova will also release its first collaboration collection with one of its most famous fans: Cardi B, who starting posting about the brand when she was known for her role on the reality show “Love and Hip Hop New York.” While plenty of brands offer influencer collaborations, Cardi B is one of the most sought-after celebrities in the market right now — after sitting front row at Alexander Wang and Marc Jacobs last season, she was dressed by Moschino at the Met Gala. Saghian says more celebrity collaborations are in the works.

Fashion Nova is also expanding into beauty. Saghian already owns at least one beauty brand — Sam Marcel, though he says he is not actively involved in it — and offers a selection of lesser-known brands on Fashion Nova’s site. But he plans to start bringing on more of the types of brands that one finds in Ulta and Sephora, in addition to the in-house brand NovaBeauty currently in development.

“Marketing is very important and we’ve mastered that, but I think in order to continue growing this platform, we need to focus on the product,” said Saghian. “We are transforming FashionNova.com into a one-stop shop lifestyle destination.”

Are Influencers Really Worth the Money?