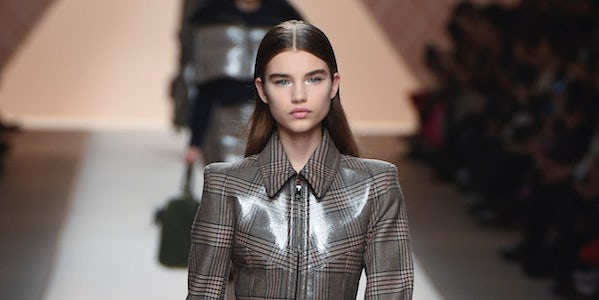 MILAN, Italy — The presence of young Hollywood aristocrats like Tommy Dorfman (“13 Reasons Why”) and Sasha Lane (“American Honey”) in the front row at Fendi on Thursday morning was incongruous in the light of a collection that so resolutely shelved the house’s oftimes flirtation with eccentric futurism in favour of the stolidly bourgeois. Silvia Venturini Fendi positively twinkled backstage when Luis Bunuel’s “The Discreet Charm of the Bourgeoisie” was mentioned. But that could only mean there was an ironic subtext in play.

She mentioned “romantic power” as a reference. The collection was stern and architectural in its composition, with box shoulders from which jackets and capes effortlessly cascaded. Skirts and capes zipped open at the side, unleashing sunray pleats. Shoulders were made even more emphatic with squared capelets. It was peculiar to find a precedent in Walter Van Beirendonck’s most recent collection, but fashion thrives on such unlikely, and often unrecognized, connections.

Otherwise, the artisanal alchemy that is the seedbed of Fendi’s creativity was present in Prince of Wales checks in glazed canvas, in wickedly artful transformations of handkerchief linen into coat collars and embroidered dresses, in the spirograph embroidery on Adwoa Aboah’s cape, in the diamond fringing on another cape. All of which rather begs the question: with so many of Fendi’s peers turning their back on fur as “old-fashioned,” will the house look to its artisans to continue expanding their extraordinary magic to other materials? Maybe that would be the quintessential irony.