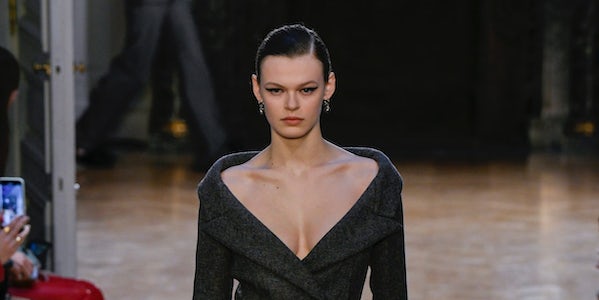 PARIS, France — Will Joseph Altuzarra be the last American standing in Paris? Perhaps not, but out of the designers who decamped to the city’s fashion week a few seasons ago, only he and Thom Browne have made the decision to show here feel like more than a passing whimsy.

There are multiple reasons why it suits him and not others. For one, he was born in Paris — to a Chinese-American mother and French father — and worked here as a young designer. There is also a certain Frenchness to his aesthetic, despite the fact that he now lives and works in New York. But, at this point, it’s also practical: Paris has been good for business.

“We’re really into a routine now,” he said backstage on Saturday after a show held in the corridors of the Hôtel Salomon de Rothschild, a mansion that has hosted plenty of big-name European designers from Valentino’s Pierpaolo Piccioli to Stefano Pilati during his tenure at Yves Saint Laurent. “I would never swear off showing in New York, but right now I don’t have plans to go back.”

His designs surely stand up well enough against the European heavyweights that populate the schedule here. He became a father late last year, so it’s understandable that his starting point for this season’s concept was family. Specifically, a box of his maternal grandmother’s dresses that go back to the 1940s. These heirlooms, carried with her when she emigrated from China to the United States, were discreetly referenced today in Mandarin-collar dresses painted with serene florals.

The designer’s signature skirt suiting took on a new air, with collarbone exposing portrait collars and pin-tucks at the ribs that held each blazer close to the body, with a crinkling velvet version oozing the light sexiness he often searches for. But a sense of intimacy showed itself most clearly in the boudoir details: feathers trimming a string-thin leather belt, furry d’orsay pumps, flat slides inspired by his grandmother’s own.

There’s something impressively consistent about Altuzarra’s work. His designs are familiar yet move forward ever so slightly each season. But as the designer of a semi-independent label competing against the big guns, Altuzarra could stand to sharpen his aim in accessories. His latest bag, known as The Cuff and first introduced last spring, lacks the specificity of his clothes or even his shoes, which are improving every season. Yet whatever he plots next, Paris suits Altuzarra. It’s nice to see the designer at ease on fashion’s biggest stage.