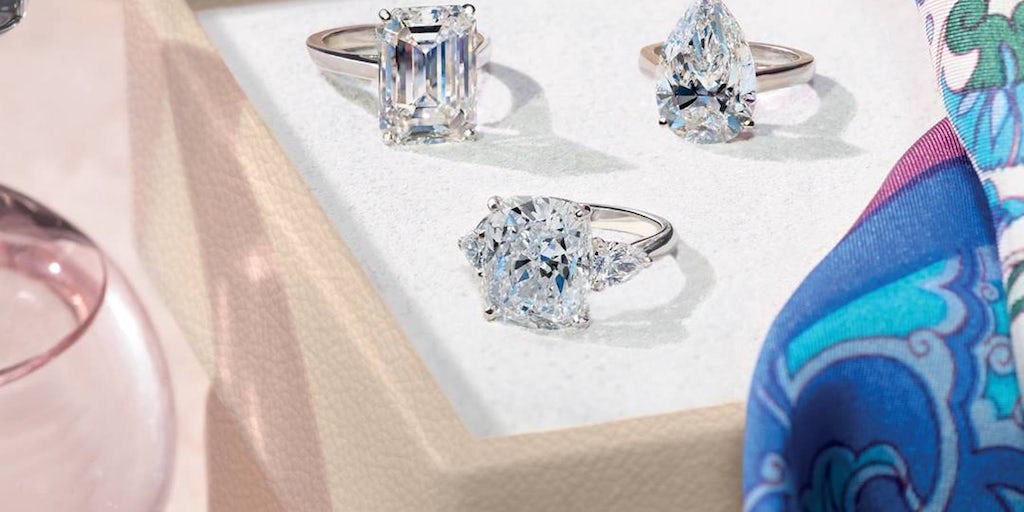 LONDON, United Kingdom — Since De Beers abandoned its decades-old policy of refusing to sell lab-grown diamonds as jewellery, the price gap between man-made stones and natural gems has widened — and the difference is set to get even bigger.

When De Beers shocked the industry with its U-turn in May, a 1 carat synthetic diamond cost about $4,200 while an equivalent mined gem sold for $6,000. But since September, De Beers has been selling gem-quality man-made stones for just $800 a carat.

De Beers says it wants to create a clear distinction between lab-grown diamonds and natural gems. The hope is this will reinforce the mystique of stones formed in the earth’s crust so consumers keep buying them for major events such as engagements.

By contrast, its synthetic diamonds grown in Britain at its Element Six labs and sold through jewellery subsidiary Lightbox are marketed as sparkly, pink, blue or white fashion accessories that are neither as rare nor precious as real gems.

The risk for 130-year-old De Beers, which coined the marketing tag “A Diamond is Forever” in 1947, is that its branding of lab-grown gems could undermine natural diamonds.

But so far, De Beers’ strategy has been working. According to analyst Paul Zimnisky, the average discount of a 1 carat generic lab-grown diamond to a natural diamond had widened to 42 percent by mid-November from 29 percent in January.

At the same time, production costs to make high-tech diamonds in a laboratory have plummeted to as little as $300 a carat from about $4,000 over the past decade, according to consultants Bain & Company and two former De Beers’ employees.

That means De Beers has plenty of scope to cut prices further, to reinforce the cachet of natural gems and to undermine synthetic diamond rivals that have been earning substantial margins in recent years, analysts say.

“The cost of these synthetic diamonds will go down to production costs plus a competitive profit margin. There is no shortage,” said Martin Rapaport, who publishes a list of natural diamond prices regarded by many in the industry as a benchmark.

De Beers is also investing $94 million over four years to build a US factory that will churn out 500,000 carats of lab-grown gems a year and Chinese producers are stepping up their output of cheap manufactured diamonds.

“I think De Beers will keep the pressure up and may even cut prices further from the $800 level once they get their new factory up and running,” a diamond industry executive who used to work for De Beers said on condition of anonymity.

Until about five years ago, diamonds produced from carbon using complex technology had largely been shunned by jewellers as a fringe product, even though they have been used in industry for decades.

They are trying to minimise the tail risk of the substitution scenario.

But man-made gem-quality diamonds have enjoyed growing sales from millennials attracted by the prospect of cheaper stones that are guaranteed to be conflict-free.

The industry has attracted investors from Silicon Valley and Hollywood, including “Blood Diamond” star Leonardo DiCaprio, who helps promote man-made diamonds as ethical and low-carbon — claims that are disputed by the natural diamond sector.

While the nascent lab-grown sector can still be profitable with a wider discount to natural gems, the eye-watering margins at a string of start-ups could be threatened if prices continue to fall, especially for larger gems, analysts and insiders said.

Public data is not available for the privately-held lab-grown diamond firms, but Zimnisky calculates many have core profit margins of about 50 percent.

“The idea of De Beers is clearly to set a price point where it may deter large volumes of capital to come into the lab-grown diamond market,” said Morgan Stanley analyst Menno Sanderse. “They are trying to minimise the tail risk of the substitution scenario.”

While operating costs of man-made diamonds are falling, initial investments can be steep, handing De Beers an advantage given it is backed by mining company Anglo American.

De Beers declined to comment on its costs. It said it was selling lab-grown diamonds at a profit, refuting suggestions from rivals that it is dumping the man-made gems on the market.

De Beers says it simply saw a demand for lab-grown diamonds and now technology is sophisticated enough to produce gem quality as well as industrial stones, it decided to fill it.

So far, lab-grown diamonds only account for about 2 percent of the overall diamond jewellery market.

California’s Diamond Foundry, backed by DiCaprio and Silicon Valley investors, is among dozens of lab-grown gem producers to emerge over the last decade as technology has evolved since the first synthetic industrial-quality diamond was created in 1954.

Firms have been attracted by high prices and the ability to extract profits from several areas of the value chain.

While the natural diamond industry includes miners, traders, polishers, jewellery makers and retailers, all adding their own margins, the man-made sector controls many if not all of those functions in single firms.

German-born Diamond Foundry Chief Executive Martin Roscheisen, who has founded several Silicon Valley start-ups, said his firm has not had to cut prices due to Lightbox.

“It’s a very high-risk gamble that De Beers is taking that so far we don’t see working out, because they have primarily legitimised the man-made category,” Roscheisen said.

Another big initiative held its nerve in the United States, the country which accounts for most lab-grown diamond sales.

Major department stores J.C. Penney and Macy’s announced in October the roll-out of a bridal collection of lab-grown diamond jewellery in time for the peak Christmas season — and stuck to their guns on pricing.

A three-carat lab-grown diamond engagement ring is listed on Macy’s website for $19,950. The jewellery is made by Richline Group, which his owned by Warren Buffett’s Berkshire Hathaway.