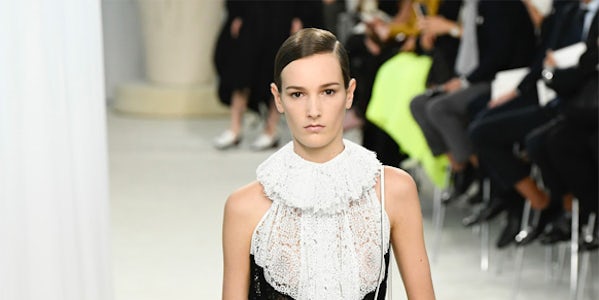 PARIS, France — If there was magic in the clothes Jonathan Anderson showed for his own label in London, it turned out that was just an appetiser for the Loewe collection he offered in Paris. The show was an ethereal vision of princesses past, present and future. A pannier-ed Infanta from a 17th-century Spanish court painting, Victoria, the virgin bride in her lace-trimmed nightgown, the young Elizabeth in a flaring tan coat…oh yes, I could follow the trail of the crowned heads of Europe through this collection. Maybe that’s just my odd fantasia, but Anderson did speak of a poetic, aristocratic spirit, and that certainly fitted the ravishing purity of clothes which were clearly not destined for quotidian drudge.

Was it Rick Owens talking about the power of innocence the other day that planted a seed? Here, there was a sequence of dresses — layer upon layer of sheer white handkerchief-hemmed skirts, evanescent sprigged florals, long, languid lace — that embodied the idea. But Anderson countered innocence with black outfits that suggested seasoned experience: a sheer fetish look, a black leather dress with a plunging neckline. It was a classic fairytale confrontation. Good princess, bad princess. He indulged the theatricality of that notion with fantasy flourishes: damsel sleeves, huge cloaks, the leather jerkin and thigh boots of a young swain.

This is play for Anderson. An incongruous mesh of references creates a disorienting whole. It’s most apparent in his staging. Here, the set was lined with pleated white curtains, clinical, like a room in a self-consciously stylish hotel, like the Sanderson in London. The curtains rolled backwards and forwards on tracks, opening on no windows, only other curtains. Scattered through the seating were stands of pampas grass, (what you might see out the window in Spain, according to Anderson) and huge fingers of amethyst, their lilac shade reflecting the collection’s accent colour. They revolved throughout the show. The music was hypnotic electronic ambience by artist William Basinski. The effect of set and soundtrack was a constant circular motion. It’s the same with Anderson’s clothes: the constant circling through old and new, past and future. But what was clear with this collection is how his dedication to craft has become a thing of awesomely precise beauty. It rewards the most minute scrutiny.