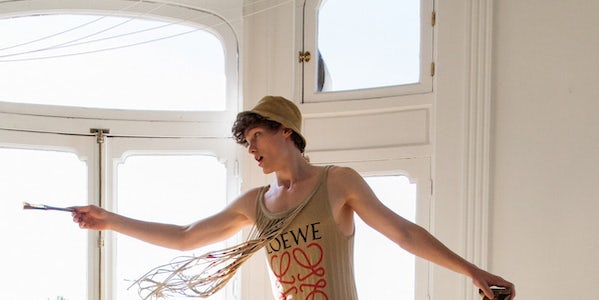 PARIS, France — Jonathan Anderson’s ongoing, artful curation of Loewe’s visual presence has attached him of late to veteran American photographer Duane Michals, whose interest in Surrealism insinuated itself into his lookbook for the latest Loewe menswear collection. Or maybe it needed no help. When Michals defined Surrealists as “pranksters who play with the contradictions of reality,” he could easily have been talking about Anderson and his gleefully eccentric approach to design. (Dumbo sweatshirt, anyone?)

That has helped to make Loewe one of the most consistently uplifting waystations on the men’s fashion circuit. Anderson’s new collection wasn’t about to change that in any way. It was a delight, from the tip of its fisherman’s hat to the toe of its slippers (preferably the ones with the trompe l’oeil needle-pointed feet).

The showroom was carpeted with pompoms, constantly shifting under the feet of visitors. They created an appropriately random counterpoint to the clothes. Random as in the graphic of a lion lifted from the sacks that deliver leather to Loewe’s factories, or a trouser stripe Anderson borrowed from a pair of shorts worn by an English sailor in the time of the Spanish Armada, or a shearling military jacket, all frogged-up like a Napoleonic drummer boy’s.

It’s not hard to see why randomness appeals to Anderson. Loewe’s It bag of the moment is a straw basket. Launched almost as a dare, it has since racked up sales in the many thousands. There’s a clear lesson in such arbitrariness.

But that kind of success highlights Loewe’s trump card under Anderson: craft. One of the most purely beautiful pieces in the collection was a linen shirt paneled with samples of broderie anglaise from the Belfast School of Needlework. Another linen shirt and shorts combination featured Miyake-like tie-dye inspired by Mark Rothko. And, elaborating on the trompe l’oeil shoe theme, there was a particularly special pair of sandals cleverly moulded on feet.