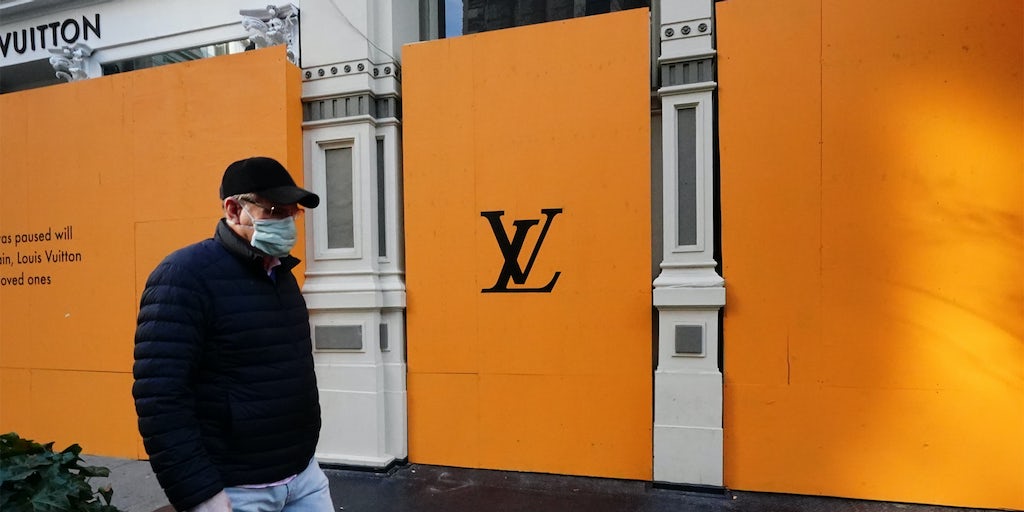 PARIS, France — The world’s largest luxury group is cutting costs and preparing for an uncertain future as the coronavirus crisis shrinks its business.

LVMH reported a 15 percent drop in its first-quarter revenue compared with a year earlier, to €10.6 billion ($11.5 billion) as the coronavirus froze business in China. Business started to pick up again in Asia toward the end of the quarter, but by then the group was forced to close stores and workshops in Europe and the United States.

The declines were worst in the group’s selective retailing division, which includes DFS, the duty-free shop chain that has seen business collapse along with international air travel. Watches and jewellery sales were also down 24 percent, as brands like Bulgari rely on Chinese shoppers and tourists.

The dropoff in fashion and leather goods was milder, with sales down 9 percent year-over-year to €4.6 billion. Dior performed better than the group’s other fashion brands, while Givenchy, Celine and Fendi fared worse, Chief Financial Officer Jean Jacques Guiony said in a call with analysts.

Guiony said LVMH had been “humbled” by the crisis, but predicted the pandemic would subside in the coming months, and that the group would gain market share. The crisis has accelerated trends that predate Covid-19, including Chinese consumers spending more domestically, he said.

Here are some takeaways from LVMH’s results:

1. Chairman and Chief Executive Officer Bernard Arnault takes a salary cut. He’ll forego his salary for April and May and only earn his base pay in 2020. François-Henri Pinault, CEO of rival Kering, had previously said he will take a 25 percent pay cut through the end of 2020. LVMH board members will cut their attendance fees by 30 percent for the rest of the year.

These changes were decided the night before the first-quarter results, when the group also decided to cut its dividend for 2019 by 30 percent.

2. The group is planning deep cost cuts. LVMH plans to reduce capital expenditures by 40 percent this year to offset the decline in sales.

Much of those savings will come out of postponing projects to 2021, said Guiony. As for leases, Guiony said that landlords in China had been more amenable to sharing in the sales losses than those in Europe and the US.

“The majority of landlords are being quite inflexible,” he said, adding that the response is disappointing and will have “long-lasting consequences.”

He also said marketing costs are being reviewed, a potential warning to publishers like Condé Nast that are already seeing declining advertising revenue.

3. Sales in China are picking up fast. The group said there were early signs of recovery in China, Taiwan and South Korea in the second half of March. In some cases in mainland China, sales were up 50 percent year-over-year in early April, Guiony said.

Since Chinese tourists are responsible for about 50 percent of the main LVMH brand’s sales at European direct retail, the domestic growth rate could be seen as an acceleration of the “repatriation” trend luxury brands have been seeing in recent years as more Chinese shoppers are buying domestically. But with travel restrictions and Europe shut down, Guiony was hesitant to make too much of the spike there.

4. The future of travel retail is grim. International flights have all but paused and with them, the shopping habits of tourists who shop Louis Vuitton and Dior while abroad.

The tourism halt is hurting airport duty-free retailer DFS the most of any LVMH entity and the group is cutting that business by 25 percent.

“We are taking very tough measures to reduce the cost base,” said Guiony.

The main question is to be able to adapt and be flexible to the needs that the current situation demands from us.

5. Bulgari’s bad quarter raises questions about the Tiffany & Co acquisition. On the earnings call, several analysts questioned whether LVMH would move ahead with its $16.2 billion acquisition of Tiffany & Co. as planned. One asked whether LVMH would attempt to buy shares at a lower price, a rumour the company forcefully denied in March. Another asked whether there was a chance the deal would fall through.

Guiony dismissed both questions, referring analysts to the merger agreement.

6. The ready-to-wear seasons will shift — but only temporarily. LVMH plans to revamp the fashion calendar in an effort to reduce the inventory overhang that has built up while stores are closed.

The plan is to deliver summer products as expected starting in June, when stores will hopefully be reopening in Europe and the US. The sales period for spring/summer collections will be extended, and fall collection deliveries pushed further into the second half of the year.

“It’s very difficult to build an online presence in the current environment,” he said, adding that “it will come down when things go back to normal.”

8. LVMH is preparing safety measures for store and factory re-openings. Guiony said the company is preparing to take measures to ensure the safety of its sales associates and customers when stores do reopen, but called it an “evolving process” that will radically change over the next two months.

Similar preparations are happening at LVMH’s suppliers in France and Italy, and he said he does not expect problems producing the autumn/winter collections.

“The main question… is to be able to adapt and be flexible to the needs that the current situation demands from us,” he said. “We are working hard to put in place conditions that would enable our people to come back to work as soon as possible.”

For Luxury, an Acceleration of the Inevitable