NEW YORK, United States — “Welcome to Story! Have you been here before?” That’s what a greeter asks each-and-every person who walks through the doors of Story, a 2,000-square-foot store located steps away from the High Line, the elevated park-cum-tourist magnet in New York’s West Chelsea. That’s because Story’s unconventional concept — it gets a complete makeover with a new design, product assortment and marketing message every four-to-eight weeks — is still foreign to many.

Story, founded in 2011 by brand consultant Rachel Shechtman, has been acquired by Macy’s, Inc. The financial terms of the deal were not disclosed, although Story’s West Chelsea outpost will remain open as part of the agreement. Going forward, Story will be a Macy’s sub-brand, not a standalone player like Bloomingdale’s or Bluemercury, which are also owned by Macy’s, Inc. Along with continuing to develop Story, Shechtman will join Macy’s Inc. in the newly created role of brand experience officer, reporting to president Hal Lawton. 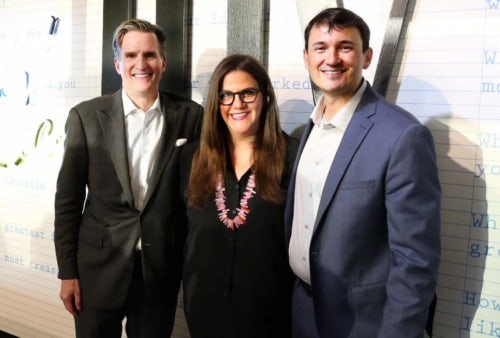 In her new role, Shechtman will be tasked with bringing Story’s interactive experiences — which, over the past 40 iterations of the store, have included everything from virtual reality meditation to a hot-towel shave station — to Macy’s, a legacy retailer searching for relevance in a rapidly shifting retail climate. In its 2017 fiscal year, Macy’s generated $24.8 billion in sales, down 4 percent from $25.8 billion in 2016. “Brick and mortar for us has been tough. It has gone from being this place of transaction and browsing to something very different,” said chief executive Jeff Gennette. “The need to change brick-and-mortar to make it more experienced-based is a high priority for every omni-channel retailer out there. We all have to figure it out.”

But how exactly Story will come to life at Macy’s remains to be seen.

“We’ve got this amazing environment and experience on 10th Avenue, but what does that look like inside a Macy’s store?” asked Gennette, who was promoted in March 2017 after longtime head Terry Lundgren stepped down. (He quickly tapped Hal Lawton — a former eBay executive with a deep e-commerce background — to fill the role of president.)

“It may be some of the same content, but I don’t have this cookie-cutter idea in my head that it’s going to be X units by Christmas,” he added. “I’m highly interested in trying to bottle what I see at Story into many stores that have thousands of people walking through them every single day and are just ready to be turned on.”

Schechtman declined to share current business metrics for Story, but in 2016 she told BoF that the venture’s net income had doubled each year since inception. (In 2015, a standard four-to-eight week Story sponsorship cost $400,000, doubling during the holiday period.) According to a market source, the business remains healthy, which meant that Schechtman was able to entertain more than one acquisition scenario.

For Schechtman, who did not raise outside capital to fund Story, partnering with a retailer like Macy’s offers the sort of scale and infrastructure she would never have been able to achieve independently. “I’ve always said that when we scale, I want to scale to our strengths and I want to do it with a partner who brings expertise related to that,” she explained.

I’ve always said that when we scale [Story], I want to scale to our strengths with a partner who brings expertise related to that.

There are currently 690 full-line Macy’s and Bloomingdale’s stores within the Macy’s Inc. portfolio, as well as approximately 160 “specialty” stores, including outlet stores, as well as Bluemercury, a Sephora competitor. However, too many Macy’s stores are located in undesirable malls that no longer reflect the way today’s consumers shop. After committing to shedding 100 full-line stores in 2016, Macy’s has gone through multiple rounds of layoffs and plans to eliminate more jobs in 2018, along with closing 11 more stores, resulting in $300 million in savings this year alone.

But even with a shrunken footprint, Macy’s must find ways to innovate as Amazon and other internet and value-driven retailers chip away at its market share. This year, Amazon is expected to become the number-one apparel retailer in the US, according to Morgan Stanley. (It currently trails only Walmart.) Macy’s, once the largest apparel retailer in the US, is now the sixth-largest, surpassed not only by Amazon and Walmart, but Target, Kohl’s and TJ Maxx.

But in the fourth quarter of 2017, Macy’s sales increased for the first time in three years, reaching $8.7 billion, up nearly 2 percent from the same period a year earlier (and 1.4 percent at stores open at least one year), indicating that Gennette’s strategy — which includes adding more off-price stores, subtracting underperforming full-line stores and streamlining inventory — might be paying off. 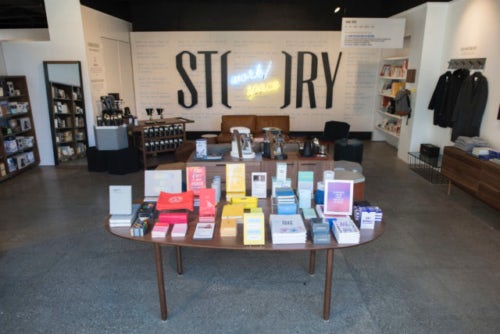 Over the past year, Gennette has also encouraged more cross-department collaboration. “There’s an intersection of product and marketing and brand experience as it comes into the store,” he said. “Integrated campaigns are going to make us more relevant and sticky with customers than we are today.”

In her new role, Shechtman could give Macy’s a much-needed boost. While it’s unclear whether Nordstrom’s “pop-in” shops, launched in 2013 and spearheaded by vice president of creative projects Olivia Kim, contribute significantly to the top line, it is a major marketing moment every time a changeover occurs. (The concept is not dissimilar to that of Story.) What makes Shechtman’s approach at Story unique is the way she has incorporated brands as sponsors — from media titles like Nickelodeon, which underwrote an ode to nostalgia, to insurance company Cigna, which backed a wellness-driven rotation. “It’s very intriguing to us,” Gennette said.

Clever packaging aside, Gennette and Shechtman — who met almost five years ago, when he was still Macy’s chief merchandising officer and she was still getting Story off the ground — believe that product remains at the heart of what will make their new partnership work.

They recalled a trip they took together to NY NOW, the well-trafficked gift show where Shechtman does a lot of the buying for Story. “It was like the exodus of Moses when the Red Sea parts,” Gennette said of the vendors’ reaction to seeing Schectman walk onto the floor.

She remembers their mutual enthusiasm — a “visceral reaction” — for a certain beaded handbag. “But it wasn’t really about beaded bags,” she said. “It was about knowing that he was someone who speaks my language… at scale. You can talk about technology and automation and same-day delivery, but if there is not good product to buy, there’s no store, there’s no website, there’s no nothing.”