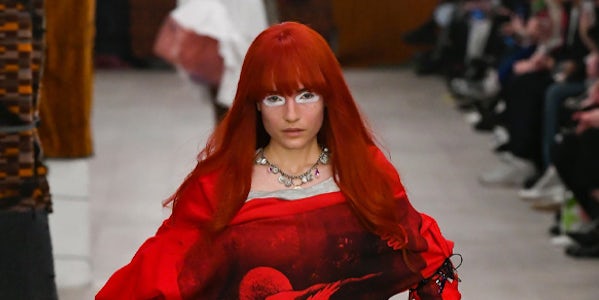 LONDON, United Kingdom — “Diameter” isn’t a word you hear often in fashion. It’s so technical. But then, you don’t often see clothes that claim space in as precise and geometrical way as Matty Bovan’s did on Friday night. Imagine the twirl of a skirt frozen in mid-air, a forest of fringing blurring its lines. Or a curtain rod suspended across a model’s shoulders, suspending a drape of knitted arcana. And even when they weren’t precise, the clothes gobbled up space: hips built out with Liberty print cushions under a fountain of tulle, huge fins of Italian brocade embroidered with pagan symbols. A conventional human silhouette mutated beyond all recognition, “scale challenging the concept of what everything is,” said Bovan. Or maybe “an out-of-body experience,” which was how tack-sharp writer Paul Flynn defined the impact in the notes he wrote for Bovan.

Those silhouettes defied an easy read. They reminded me of the activists who paint themselves with dazzle camouflage to confuse facial recognition technology, and the way our Orwellian moment is breeding a gleeful dystopian creativity. Bovan is somewhere on that thread. In fact, he may be the philosopher princeling of the most dystopian era British fashion has ever had to confront. He called this show “Off World Aesthetic Exit”. Obvious echoes of the Brexit surreality, but it sounded like he’d dealt with his despair. “In anything creative, you have to go against where you’ve been before,” Bovan declared. “I knew I wanted something with energy and spirit. It’s important to have that in clothes.” You can’t harp on what’s happened. Brooding on exits made Bovan consider what it actually meant to leave somewhere and go out into the world. Or even off the world. “Off world is a beautiful term,” he said. “Everyone is discussing if there’s going to be life on Mars.”

So take that as an invitation to reflect on possible sci-fi undercurrents in Bovan’s collection. What stood out immediately was the volume, not just of the clothes, but also of Stephen Jones’ remarkable head adornments and Syd Hayes’ wonderful wigs. They offered their wearers sanctuary. The preciousness of privacy has been utterly eroded (censured as secrecy, which sounds much shadier). Big Brother is watching, listening, dissecting every scintilla of data to turn you into one more cell in a huge matrix of consumption, and Bovan is fighting the good fight in opposition. At the finale, models walked with their own set of drapes attached: you’ve exited into the world, now you want to draw the curtains and shut it out. There was an echo of Craig Green in that, a little spiritual something or other.

There was a spirit of resistance in his bricolage. The fabulous upside-down-ness of cast-off denim jackets, collaged into semi-pencil skirts, did indeed make you wonder, as Flynn did, if that was the way you were always supposed to wear them. Fiorucci gave Bovan the jackets. “There’s so much denim in the world you shouldn’t have to make it,” he said. Listen up, fashion world. Magic your future with DEADSTOCK.

Woven into the collection were images Bovan found in the archives of the British Library: patterns from porcelain, flying swans, an old man looking through a telescope. A seeker, in other words. Curiosity is a dying art. But Matty hasn’t lost it.