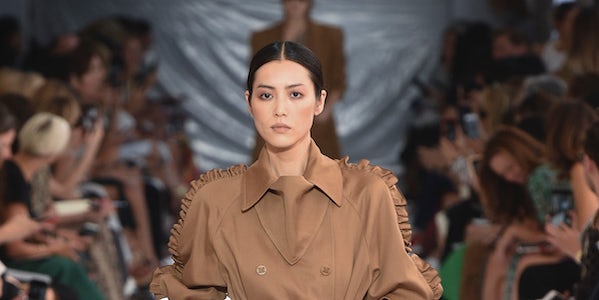 MILAN, Italy — Anne Marie Beretta is one of the unsung heroes of the 1980s. Although revered by insiders, geeks and fashion aficionados, to this day she remains largely forgotten, probably ignored, by the wider public. Yet, wherever one sees sharply defined outerwear in big, primary volumes and anything oozing a kind of powerful, primordial simplicity, there is surely a Beretta reference. Beretta worked in-house for Max Mara for a long time, designing some of the brand’s best-sellers, such as the 101801 coat.

The label’s current creative director, Ian Griffiths, took his first steps in the house as her assistant. Today he paid homage to his design mentor with a powerful collection that felt true to the roots but not nostalgic, nor inclined to replica.

Shoulders were big and square, leather trims abounded and in general there was a fierce sense of cloth being swathed around the body with as few cuts as possible. Griffith, backstage, waxed lyrical about being inspired by the enduring power of classical myths, but that was just a backstory. What matters is the idea of fierce femininity he promoted.

He is not the only one: female power, which basically means 1980s-inflected power dressing, by now looks like one of the main trends emerging from Milan. The Max Mara woman is a warrior who favours layers, but not shapelessness: her dresses have cinched waists; she walks with hands on hips, as to highlight her hourglass shape; her outerwear is firm yet floaty. Here and there there were a few ruffles that felt a bit de trop.

But the show’s only real minus was the styling: a tad too heavy on the layers. With so much design clarity, there is really no need to add distractions.