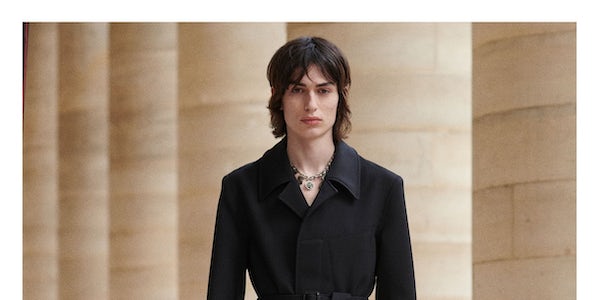 PARIS, France — On Wednesday morning, moments after Claire Waight Keller had presented 20 men’s looks for Givenchy, Carine Roitfeld was sharing her memories of the rakish Parisian journalist Alain Pacadis with Keller. The designer’s research had drawn her to Pacadis as the embodiment of the particular Parisian male style archetype she wanted to celebrate: someone who was flamboyant and louche and a bit rebellious. Roitfeld entertainingly filled in some of Pacadis’s gorier details. They helped clarify exactly what Waight Keller meant when she talked about “perverse posh.”

The presentation took place in a salon in Givenchy HQ on the Avenue George V. The models followed a winding path through an ocean of baby’s breath (the French call it “la gypsophile”). So the production was simultaneously intimate and impressive, which made an appropriate analogy for Waight Keller’s latest work. Till now, she has maintained a parallel vision for the Givenchy woman and men. This was the first step in giving menswear its own platform.

Of course, there had to be sportswear – puffa jackets, sneakers, tabbed pants – but the real action was in the elongated, elegant tailoring. Like a double-breasted suit, high closing, sharp-waisted, in a lustrous black technical twill. Or an equally lean coat, single-buttoned over a white turtleneck. It was stark but lush, suggestive of the rigour of the true libertine (which Pacadis surely was) heading out for a wild night at Le Palace (which Pacadis surely did). Same with a leather trenchcoat and pants, in an oily petrol finish, or a jacket lathered with white sequins. The silhouette, flared in jacket and trouser with an emphatic waist, inevitably evoked the Seventies. So did the wide, peaked lapels on intensely toned suits, blue paired with an orange shirt, red with fuchsia.

Waight Keller’s design origins are in menswear, but it’s only now you sense she’s really getting back into it. With her 20 looks, she created a character. With her next collection, she’s planning on giving him a much bigger stage.