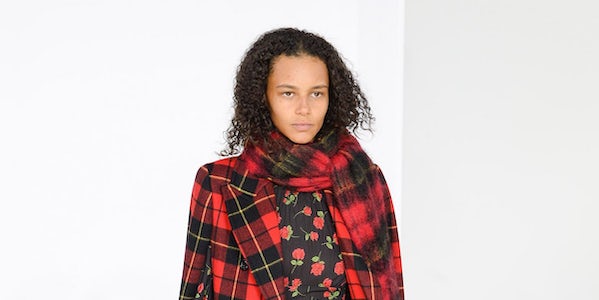 NEW YORK, United States — Michael Kors famously loves the theatre, but there is one theatre he loves more than any other, and on Wednesday morning, he got to show there. Backstage, he was gushing over all the overwhelming experiences he’s had at the Vivian Beaumont: “‘The King and I’ with Kelly O’Hara. Whoosh! ‘WarHorse.’ Whoosh! So many more…and the architecture!”

The Vivian Beaumont is one of Kors’s favourite things. Another is the song “My Favourite Things”, peerlessly enunciated by Julie Andrews. That was his theme – everything, everyone he’s ever loved: show business, fashion, glamour, headstrong women, and, of course, his hometown. “I can’t listen to the doom and gloom anymore,” he said. So the show was an enthusiastic rush through a dozen New York moods, with music to match. “It’s like Courtney Love just hung with Margot Tenenbaum and met Sabrina Larrabee on the way out, and Carrie Bradshaw stopped by, and there was a little Holly and a little Blake and a little Zendaya…[pause for breath]…I’m fortunate after 38 years to have all these women who float in my head. It’s Almodovar. I don’t want to make a movie, but it is that.”

The mighty Pedro wasn’t a bad place to start. When Binx Walton stepped out, swathed in tartan over a rose-printed dress with leopard accessories, there was something distinctly Almodovar-ish about her. And that was the first mash-up of many in the name of individual style. In some instances, there was even a hint of shaggy dishevelment, which was a joy coming from a designer who is usually the quintessence of New York polish. There were other mildly eccentric clashes everywhere, in the yellow cableknit over the flaring ballerina skirt in duchesse satin, in 50s cocktail dresses worn with combat boots, in menswear that featured silk pajamas under a dogtooth trench.

Kors was clearly having fun. He even felt comfortable collaborating for the first time, with the British illustrator David Downton, who supplied his signature couture-elegant graphics for use on bags and a vavoom Liz Taylor sheath for Bella Hadid. But what do you think Kors will remember most about the occasion? Will it be the fact he got his enthusiastic self on the cover of a Playbill for the Vivian Beaumont Theatre? Place your bets now.