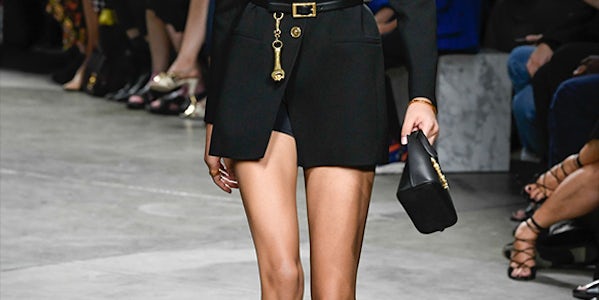 MILAN, Italy — In fashion history, Friday night will forever be remembered for the five minutes it took Jennifer Lopez to break the Internet at the end of Donatella Versace’s spring show in Milan. She went ballistic in a re-edition of the Versace jungle print dress that she first wore to the Grammy Awards in February 2000. Back then, when millions descended on the Internet for a second look, there was nothing to see because there was no Google Image Search to offer instant gratification. Google elves went to work at once to fix the problem. So you owe Jennifer Lopez and Donatella Versace for Image Search.

“That was a magic moment,” said Donatella as she previewed her new collection for a handful of international press earlier on Friday. At that point, she was keeping Lopez’s appearance a surprise, but she explained that the jungle print would be the foundation of the collection. Versace’s past has become a bottomless well of inspiration for the brand. That’s smart. It’s not simply that a good idea is a good idea whether it was then, is now, or ever will be. Or that many people wouldn’t have got it first time round anyway. (Hence the delirium that surrounded Donatella’s supermodel redux finale a few years back, a moment whose magic was quite the match of La Lopez’s sashay round the circuit on Friday night.)

I’ve often felt that, in their conviction that a new season demanded novelty, designers arbitrarily dispensed with notions that were worthy of further exploration. Donatella’s jungle print was proof. On Friday, it was the gift that kept on giving, all the way to the bank (that fabulous finale).

She applied it across the collection, draped and knotted into formfitting dresses, in a silk pantsuit, printed on casual cottons, beaded onto fringed, sequinned nymph dresses, even reconfigured in sunset shades of orange and pink. Excessive it may sound, but it was masterfully controlled. Just like everything else on the catwalk. The lushness of the jungle was counterpointed by a maitrêsse-strict black story. Donatella drew just a little on her brother’s last couture collection (and there is still plenty to explore there). Bella Hadid’s black apron dress and banker-striped cotton shirt, decorated with fringed rosettes of shirting, had a sharp fetishistic edge. Her high-heeled sandals, laced to the knee, compounded the effect. From her thin belt hung a matchbook cast in metal. Other belts had other peculiar objets: a tape dispenser, a tiny spanner.

There was clearly a lot more to this collection than met the eye. For all the visual extravagance, it felt curiously shadowy. There was even a tie-dye moment which felt distinctly Gothic, and that wasn’t simply because the models for those outfits were especially sullen, with their pouts and their lank hair. Amber Valletta, the woman who originally wore the jungle print dress on the catwalk two decades ago, closed the show in a black sheath with a severely sculpted bustier. The look felt like a powerfully stark rejoinder to Lopez’s flagrant sensuality.

Watching Donatella at her preview, you could imagine that she was mulling the contrast. The great then and now: time passed between Jennifer Lopez wearing her dress at the Grammies and Jennifer Lopez wearing exactly the same look 20 years later – and looking exactly the same. No, better! Like nothing happened. But everything happened. For one thing, technology’s promise curdled. For another, fashion is a radically different place to be, challenged in ways it could never have foreseen all those years ago. But Donatella’s show proved that some things, at least, don’t change. And, for a moment, they can still be magic.