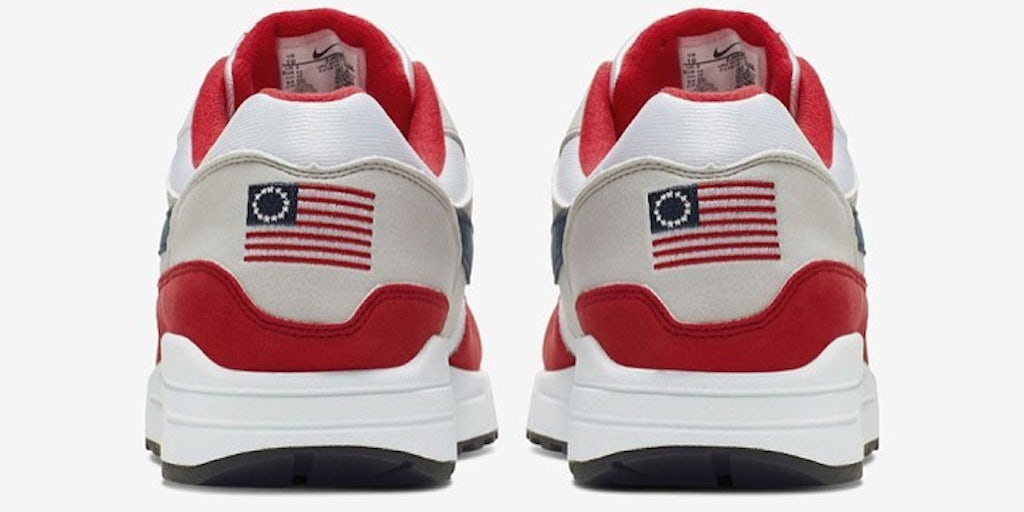 DETROIT, United States — The Fourth of July shoes Nike Inc. pulled from retailers due to concerns over racist symbolism are selling for thousands of dollars on the secondary market.

Prices for the Air Max 1 USA spiked to $2,500 a pair — roughly 20 times higher than the retail price — on sneaker marketplace StockX, where buyers place bids and sellers set asking prices anonymously. The first of the sneakers found their way onto the resale site last week and 67 transactions have been facilitated through StockX as of Tuesday morning.

Sneakers can appear on resale sites like StockX and eBay before official sales begin because companies sometimes send advance pairs to select people to build hype ahead of a release. A representative for StockX didn’t have an immediate comment.

The Air Max 1 USA was intended as a celebration of US Independence Day, using a “Betsy Ross Flag” that features 13 white stars in a circle on the heel. But the flag, created during the American Revolution, has another meaning for some Americans as far-right groups have claimed it as a symbol of their cause. It has also been criticised as evocative of an era when slavery was still predominant in the US.

Nike told stores to send back the sneakers that had already been shipped and yanked the listing from its app. The company had been asked by former NFL quarterback Colin Kaepernick and others to remove the shoe style, according to the Wall Street Journal.

Last week in China, Nike halted the sale of sneakers designed in collaboration with a Japanese designer who voiced his support for the protests in Hong Kong. They’re also trading on StockX, with a lowest asking price for that shoe on StockX is just over $200, up from $160 at retail.

The rarest and most expensive shoes on StockX can go for tens of thousands of dollars. Last summer, a pair of coveted limited-edition Nikes sold for $24,000.