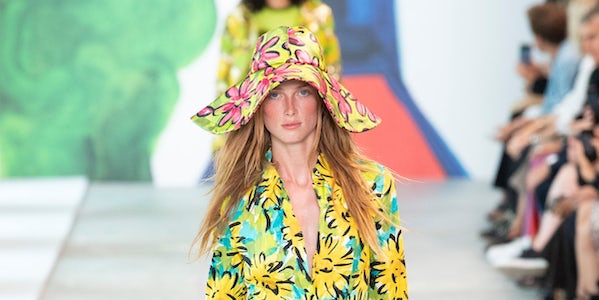 NEW YORK, United States — Manhattan was blanketed in an eerie fog for Michael Kors’ spring presentation, but the humidity level was 97 percent, so, if there wasn’t sunshine, there was at least steam heat to accompany a collection that celebrated the tropics, the Caribbean and any other points of the compass where perpetual sunshine keeps spirits high.

Fashion is clearly nursing the notion of a break from the numbing assault of the daily news cycle because fantasy escapes have been a major theme this New York Fashion Week. Kors is an old hand at such things. You could say he’s been spinning luxurious escapism for decades, regularly referencing the faces and places that embody a glamorous life.

Here, he ranged wide. Here was Babe Paley in Palm Beach in a quilted brocade pant suit, there was a Goa beach bummette in a surf tee and giddy floral scarf dress. A jumpsuit in white guipure summoned up chic 1960s house parties in Bel Air. A bell-sleeved, ruffled shift in a splashy naïve floral print by Australian artist Christina Zimpel might have been plucked from the wardrobe of a hippie chick living further up the canyon. What each of these visions shared was a hunger for uncomplicated happy days, anytime but now.

It was even more obvious in the men’s looks Kors showed, the madras shorts, cashmere hoodies and lime sweatshirt highlighting another of the designer’s fantasy spots: MK Beach Club Malibu.

Kors went a bit heavy on the flower (over)power. The handful of black outfits at show’s end were blessed dark relief from the rush of turquoise and watermelon. But he certainly rammed home his point.

“Picking up good vibrations”, just like the soundtrack said. So, in providing a breezy, lightweight wardrobe to dispel the fog, was Kors betting that things are going to get better? “I believe that,” he said firmly. “I have to.” These days, it’s hard for optimists to sound anything but a tiny bit cockeyed.